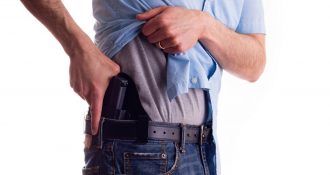 The following article, Here are the 14 GOP Senators Who Betrayed the Constitution by Joining Democrat Anti-Gun Crusade, was first published on .

Fourteen Republican Senators betrayed their oaths to defend the U.S. Constitution by joining the Democrats to undermine the Second Amendment.

The full bill came out on Thursday night, and it really is an outrage.

Despite the idiocy of this bill, 14 Republican traitors crossed the aisle and joined the Democrats to vote “yea.”

Vote is still open but there are 14 GOP ayes on bipartisan gun safety bill:

Sen. Cornyn (R, TX) was so thrilled, he added that a “compromise” on Immigration is next.

“That’s right, we’re going to do it,” Sinema added

Cornyn later tried to claim he was just joking about re-starting the immigration debate.

No one really believes him.

Continue reading Here are the 14 GOP Senators Who Betrayed the Constitution by Joining Democrat Anti-Gun Crusade ...