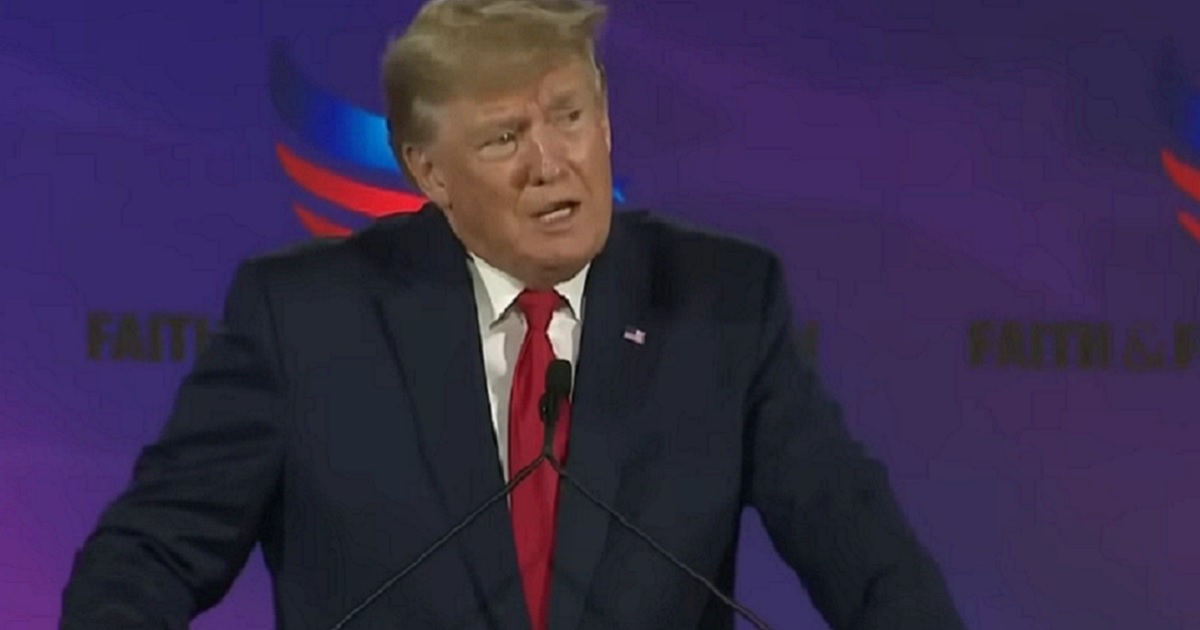 The following article, Trump's Best Speech Ever? 90-Second Clip from Friday May Be the Best Trump Footage We've Ever Seen - We Worship God, Not Gov't, was first published on Flag And Cross.

On Friday, former President Donald Trump spoke at the Faith and Freedom Coalition Conference in Nashville, Tennessee. In just 90 seconds, he perfectly encapsulated the conservative values all Americans ought to embrace.

“Everyone in this room is gathered here today because we’re all committed to the same key beliefs and the same core values,” Trump began.

“We believe that the Declaration of Independence and the American Constitution represent the principle of human civilization. Our founding documents are not a source of shame, they are a source of great pride.”

While this used to be a basic principle both Republicans and Democrats agreed upon, many on the far left have begun to attack the very documents our country was built upon.

For example, a June 2020 opinion article in The Hill declared it was “time to update the language of the Constitution.”

“The United States Constitution protects rights and liberties, but its gender and racially-oriented language undermine the promise of equality it proclaims,” wrote Richard Albert, a constitutional law professor at the University of Texas at Austin.

“Its gendered and racist words stand in the way of true reconciliation in this divided country and have no place in any modern society.”

Albert claimed that because the Constitution used the words “he” and “his” to refer to the president, it was exclusionary on the basis of gender. He also claimed that sections referring to slavery, already rendered void by the 13th Amendment, are somehow “racist.”

But “he” and “his” are standard English pronouns for generic situations when gender is unspecified. And the references to slavery have already been rectified, regardless of the language that might have preceded the 13th Amendment (ratified in December 1865).

It’s true that the original, now obsolete language related to slavery has not actually been deleted, as Albert complained, but the situation it describes no longer exists. Where liberals see that as a holdover from the past that represents a continuing reality of oppression, intellectually honest Americans see it as evidence, inscribed in the country’s very charter, of the progress that has been made toward creating, as the Constitution itself says, “a more perfect union.”

Trying to erase the language of history would be creating a lie.

Nothing in the current Constitution is racist or sexist, and suggestions to the contrary do nothing but tear apart the fabric of our country. Trump was right to affirm the value of our founding documents, and he wasn’t done there.

“We believe the United States of America is the greatest and most virtuous republic in the history of the world,” Trump said. “We’re gonna keep it that way.”

Again, many on the far left have attempted to suggest America is not virtuous because it is allegedly inherently racist. These leftists demonstrate a basic misunderstanding of the vision our Founding Fathers sought to implement, and Trump called out these lies from the left.

“We believe in law and order, and we know that the Constitution means what it says as written,” Trump continued.

This is a stark contrast from the recent words of President Joe Biden, who suggested the Constitution can be interpreted however he wishes.

“The Second Amendment, like all other rights, is not absolute,” Biden said on June 2.

You see, Biden believes he can pick and choose which rights he wishes to honor based on the policies he wants to pass. This is fundamentally un-American, Trump understands that.

“We reject censorship, blacklisting and cancel culture, because we know that the lifeblood of a free society is free speech,” Trump said. “We don’t have free speech very much in this country anymore.”

While the right to free speech does still exist in America, Trump is right that many people wish to take it away. This includes employees Big Tech companies like Twitter, who choose to censor opinions or even facts they do not agree with.

Finally, Trump made the most important point of his powerful speech, because this is the point that makes each of the other points true.

“We know religious freedom is the foundation of all freedom, because we know that our rights and liberties come straight from the hand of our Creator,” Trump said.

While this point can be easy to forget, it is extremely important to the foundation of our country. Our rights are not given to us by the government, but rather by God when he created each and every one of us. The role of government is simply to protect those God-given rights.

“We believe that America is a sovereign nation with a sovereign people,” Trump said. “Which means that we must have a strong, secure and sovereign border.”

In a climate where many basic American principles are being attacked, this speech from Trump was exactly what America needed to hear.

Continue reading: Trump's Best Speech Ever? 90-Second Clip from Friday May Be the Best Trump Footage We've Ever Seen - We Worship God, Not Gov't ...