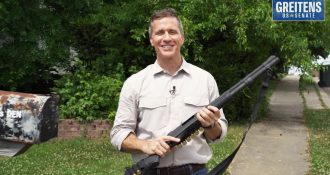 In the video Greitens, the former GOP governor who resigned from office in 2018 amid false sexual misconduct allegations, wielded a shotgun and declared, “We’re going RINO hunting.”

Of course, RINO stands for “Republican in name only.”

“The RINO feeds on corruption and is marked by the stripes of cowardice,” Greitens said in the video.

Greitens added that with his RINO hunting permit, “there’s no bagging limit, no tagging limit, and it doesn’t expire until we save our country.”

“We are sick and tired of the Republicans in Name Only surrendering to Joe Biden & the radical Left,” Greitens later tweeted. “Order your RINO Hunting Permit today!”

We are sick and tired of the Republicans in Name Only surrendering to Joe Biden & the radical Left.

Naturally, the anti-American, left-wing social media sphere lost its tiny hive mind. Facebook and Twitter both banned the ad. Twitter, though, later reversed itself saying that viewing the ad was in the public interest.

Why did Twitter do that? Because leftists got mad that they can’t show Greitens’ video so they can call it “dangerous.”

Naturally, the left was happy to oblige, and they have been blasting the video.