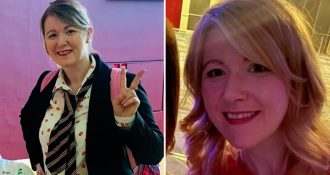 Emma Wright, 41, who had been an art teacher at Huxlow Science College in Northamptonshire, England, for eight years said that there was nothing wrong with allowing her students — some as young as 15 — to pose in the nude in class because it was all about “art.”

School officials had been alerted that the teacher was allowing girls to disrobe and then hold objects is front of their breasts as the other students took photos for an assignment.

“The pictures showed teenage girls posing only in their underwear, while holding cigarettes and booze containers, with their hands, bottles or cans covering otherwise naked breasts,” The Sun reported.

After an investigation, the school finally fired the teacher.

But now the teacher is speaking out saying she was improperly fired.

“The TRA has not taken that into account and they have not got an understanding of art in education, which is the basis of my letter to the TRA and MP,” Wright told the paper.

“I have written to my MP, the union, and the Education Minister regarding this,” Wright continued. “I am a good person. I am not the person they are making out to be.”

“I am hoping the local community are as shocked as I am, and as sad and angry,” she added. “They know me. I have taught in that school for a long time.”

Wright believes that she is the victim of “deep injustice,” but will not appeal the ban because she never wants to teach again.