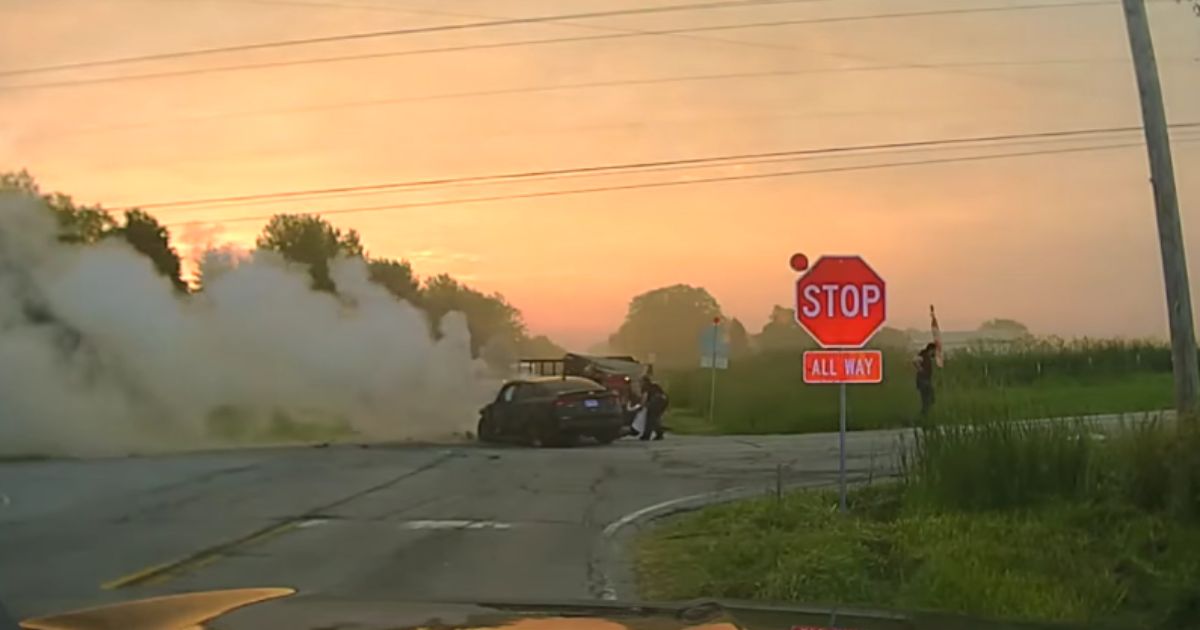 The following article, Officers in Illinois Save Driver and Passenger from Burning Car: 'Things Could Have Gone Much Worse', was first published on Flag And Cross.

The police department in the village of Oswego, Illinois, this week shared video of its riveting rescue of two people from a burning car.

The video clip, shared on Facebook, opens in a scene where two vehicles have collided. The closer car is on fire, smoke billowing from its caved-in front.

A person already is standing alongside the passenger side of the car as the officers run over.

Oswego Police Officer Rebecca Hayes runs to the car first, approaching the driver’s side and tugging at the door, then circles around the back to the passenger side.

Officer Chad Vargas is close behind, and other good Samaritans can be seen in the distance cautiously approaching the scene as well.

While Hayes continues to work on getting the occupants free, Vargas douses the flames with a fire extinguisher, then helps Hayes remove someone from the vehicle.

In less than a minute from their arrival, they have the first person free. Both the driver and passenger were rescued; police shared the  dashcam video of the rescue on Facebook to commend their officers’ work.

“We would like to recognize two of our officers for their quick actions,” Oswego Police posted on Monday.

“Oswego Police Officer Hayes and Officer Vargas arrived on the scene and found a vehicle with its engine on fire. The officers immediately rushed to the car to remove the occupants and put the fire out.

“Once out of the car, the driver and passenger were moved to safety and the officers began first aid and lifesaving measures.”

“No one else was injured in the crash,” police said. “The driver was charged with driving under the influence, among other charges.

“Things could have gone much worse. Please don’t drink and drive.”

In the Facebook comments section, community members have extended their thanks to the officers.

“Never enough credit goes to the men and women in blue. Excellent work!” one person wrote.

“Quick thinking saves lives!” a second person said. “Thank you both, and all the OPD for keeping our community safe!”

“Awesome work Officers Hayes and Vargas,” wrote a third. “I am so proud of both of you.

“Thank you for keeping us safe. God Bless you both and keep you safe.”

Continue reading: Officers in Illinois Save Driver and Passenger from Burning Car: 'Things Could Have Gone Much Worse' ...