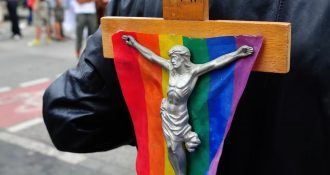 A Worcester Catholic Middle school was dumped from the church school system for refusing to take down all its pandering gay pride paraphernalia, according to reports.

The Diocese of Worcester says that the Nativity School of Worcester refused orders to eliminate all its profane gay pride decorations. So, the Church has removed all funding and accreditation from the school as a result.

The punishment came after Bishop Robert J. McManus refused the orders to remove the gay symbols and then even published a defiant open letter telling the community why he was refusing orders.

“I publicly stated in an open letter…that ‘these symbols (flags) embody specific agendas or ideologies (that) contradict Catholic social and moral teaching,'” McManus said, according to CNN. “It is my contention that the ‘Gay Pride’ flag represents support of gay marriage and actively living a LGBTQ+ lifestyle.”

“This is also true of ‘Black Lives Matter,'” McManus added. “The Catholic Church teaches that all life is sacred, and the Church certainly stands unequivocally behind the phrase ‘black lives matter’ and strongly affirms that all lives matter.”

As a result of the decision, the school may no longer call itself a Catholic institution.

It’s about time a church stands up for its long-held principles.