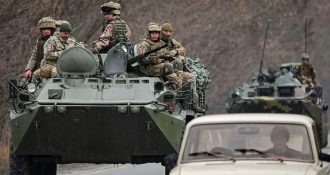 The following article, Don’t Waver on Russian Sanctions, was first published on .

The headlines from Ukraine keep getting worse. “Russia is Reportedly Using Even Deadlier Weapons,” AP reported recently. It is using bombers, tanks, even anti-ship weapons to cause as much damage as possible. Russia has seemed to deliberately target civilians, and it seems to think that the more of them it kills, the better.

In response, the rest of the world has imposed strong sanctions to shut down the Russian economy and compel its government to end the offensive. That policy is having an effect. “The Russian economy is staggering under the weight of financial and trade sanctions, export controls, and the exodus of approximately 1,000 U.S. and multinational businesses,” the White House wrote. “The United States and our allies and partners are committed to supporting Ukraine and ensuring the Russian government feels the compounding effects of our economic actions.”

These sanctions shouldn’t be reduced. If anything, they need to be beefed up. As Ukrainian President Volodymyr Zelensky told participants at Davos: “This is what sanctions should be: They should be maximum, so that Russia and every other potential aggressor that wants to wage a brutal war against its neighbor would clearly know the immediate consequences of their actions.”

Of course, the Russian economy isn’t the only economy that suffers when sanctions are imposed. The countries imposing sanctions suffer somewhat as well, because the price of raw materials goes up. Oil, for example, started going through the roof when sanctions on Russian oil were imposed. The prices of other things will increase as well.

One of the commodities Russia produces a lot of is the metal titanium. Before the Ukraine war, it provided half of the world’s supply. This important metal is useful in high tech manufacturing, because it bonds well with other substances, such as carbon. That means it is especially useful in manufacturing airplanes.

Airbus, the European aerospace conglomerate, is a major consumer of Russian titanium. For that reason, it opposes the Western sanctions.

“We don’t think sanctions on imports will be appropriate,” Airbus CEO Guillaume Faury said at a stockholder meeting. “This will be a small impact on Russia, and would have large consequences on the rest of the countries and the industry. So we think the no-sanction policy actually is the most meaningful one.”

The Airbus strategy is paying off for the company. Airbus “has so far been able to keep importing the material, which hasn’t been directly targeted by a growing list of European Union sanctions aimed at punishing President Putin,” the trade site Mining.com explained in April.

Airbus seems to forget that it isn’t supposed to be calling the shots here. It is dependent on the EU for survival. It gets big subsidies from European governments. For example, the “Repayable Launch Investment.” As Politico explains,“Under this scheme, the governments of Germany, France and Spain have granted Airbus loans for developing new aircraft models that the manufacturer only repays if the model becomes a commercial success.” That sure sounds like a good deal if a company can get it.

Meanwhile, it goes without saying that the United States shouldn’t reward Airbus for supporting the Russian regime by buying its titanium. Airbus makes weapon systems and has an American subsidiary that bids for Pentagon contracts. But as long as Airbus is supporting Russian exports, the Pentagon should cut it off from consideration for any contracts, whether that is helicopter, tanker, or any other systems.

There are plenty of sources of titanium in the world. Many manufacturers have already found non-Russian sources of the metal, and Airbus could as well. Instead, the European plane maker is willing to break sanctions and support the Russian government to get the metal it wants. The U.S. simply cannot support that policy, and shouldn’t be making any deals with Airbus.

JamesLowe, is a public policy analyst, and a two decade’s long radio industry veteran who host’s of his own nationally syndicated radio show based in Kansas and carried on the Iheartradio App. Find out more at jiggyjaguar.com