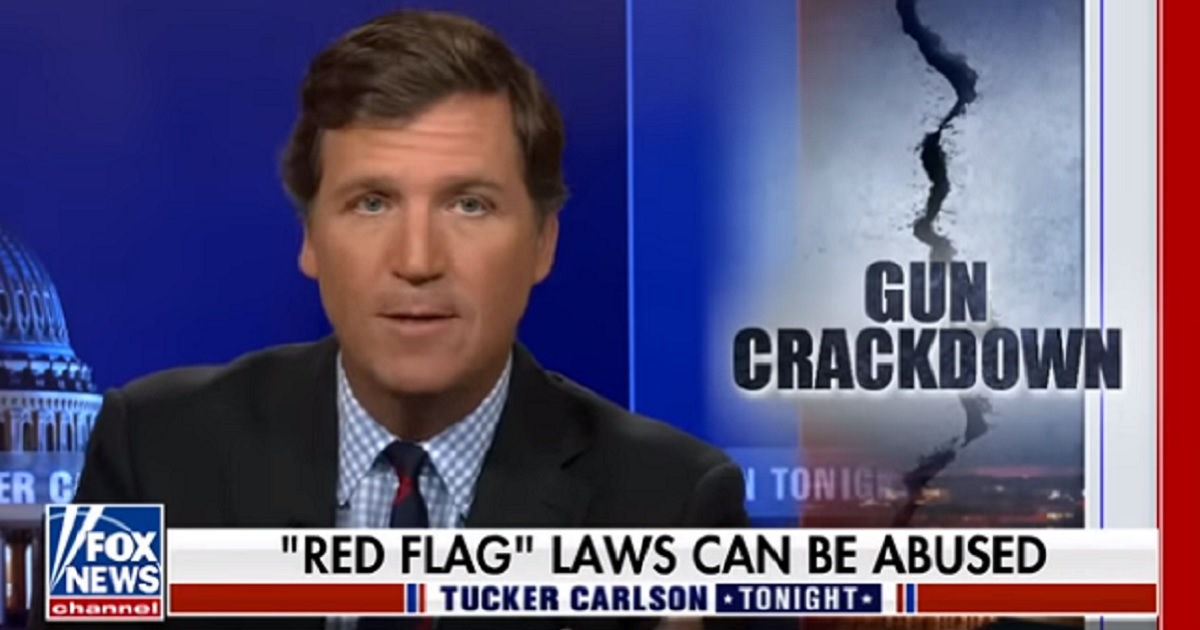 The following article, Tucker Eviscerates 'Bipartisan' Gun Proposal: 'Will End Due Process', was first published on Flag And Cross.

On Monday, CNN reported that a bipartisan group of senators had agreed on a framework for new gun control laws that could clear the 60-vote hurdle to overcome a Senate filibuster.

Much of it was what was expected: Some changes on school safety and background checks, more resources for mental health issues, and incentives for states to adopt so-called “red-flag laws.”

A news release from the group — which began meeting in earnest after the May mass shootings in Buffalo, New York and Uvalde, Texas — said the red flag provision would provide “resources to states and tribes to create and administer laws that help ensure deadly weapons are kept out of the hands of individuals whom a court has determined to be a significant danger to themselves or others.”

Red-flag laws, which allow for the summary deprivation of the right to self-defense by a court, have long been opposed by Republicans. Not anymore, however — and it’s not just the Mitt Romneys or the Susan Collinses of the upper chamber’s GOP caucus who’ve been coming out in favor of the provision in the new bill.

(At The Western Journal, we’ve long been documenting how so-called “red-flag laws” are unconstitutional and prone to abuse — and won’t reduce killings, to boot. We’ll keep bringing America that truth, even though the establishment media chooses to ignore it. You can help us by subscribing.)

“Some people will not want to touch this with a ten-foot pole because they’re concerned about the politics of it, but I think this is a time where hopefully we can transcend that personal political interest and do what we think will save lives,” said Texas Sen. John Cornyn, according to Fox News.

“To me, that’s the ultimate goal. We can do something sensible that does not undermine the rights of law-abiding citizens under the Constitution to keep and bear arms.”

Cornyn is hardly known to be a RINO. Could it be that the GOP has found a way to balance gun rights and reliably take guns away from unstable actors?

Don’t believe it, said Fox News’ Tucker Carlson. In his opening monologue Monday night, Carlson said red-flag laws “will end due process” and described them as little more than a power-grab by Democrats looking to take advantage of an emergency.

“Like supporting Black Lives Matter or fighting climate change or getting the COVID shot or standing with the brave people of Ukraine, red-flag laws seem like one of those ideas that no decent person could possibly oppose,” Carlson said.

“You want crazy people to have guns? Of course you don’t. Who would? So naturally, you’re for red flag laws. And in fact, we may soon get red flag laws across the country. So, what would that mean if we do?”

The new legislation would mean one huge thing, as far as Carlson was concerned.

“Red-flag laws will not end mass shootings, but red flag laws will end due process. Due process is a simple concept, but it’s the key to everything that is good about America,” Carlson said.

“In our system of justice, citizens cannot be punished without first being charged with a crime. Politicians cannot just decide to hurt you, throw you in handcuffs, lock you in jail, seize your property, simply because they don’t like how you think or how you vote. No. Before they punish you, they have to go through a formal process in which they describe which specific law you broke and exactly how you broke it. They have to prove it.”

Not with red-flag laws, however.

“Under red flag-laws, the government doesn’t have to prove you did anything wrong in order to strip you of your most basic rights. All that’s required to punish you is a complaint — possibly even an anonymous complaint — in which somebody says you seem dangerous,” Carlson said.

“Now, that complaint doesn’t come from a grand jury. It can come from anyone, including someone who hates you or someone who simply doesn’t like your politics. It doesn’t matter, because no jury will ever see it. On the basis of that unproven complaint, you lose your freedom and your ability to defend yourself and your family.”

He went on to note that “the Supreme Court has said, unequivocally, that it can’t happen here” — and described the court case in question, Caniglia v. Strom, which was decided only last year.

“A year ago, the Supreme Court ruled in a case called Caniglia v. Strom. Police in Rhode Island had seized the personal firearms of a 68-year-old man whose wife had called in a complaint against him after they had an argument. That man had committed no crime. He’d never been convicted of a crime, and he was judged by doctors to be sane. And yet the authorities took away his guns anyway.

“He sued under the Fourth Amendment and the case went all the way to the Supreme Court. The result was not even close. The Supreme Court sided with the gun owner in that case in a rare nine-zero decision,” he noted.

“That means that every justice, liberal and conservative, agreed that authorities cannot just seize your property or throw you in jail because they don’t like the way you look or because someone is mad at you. So, red flag laws are unconstitutional, period. We don’t need to guess about that.

“And yet the Biden administration is pushing them anyway. Why? Because they don’t care.”

And the reason they think they can get away with it, of course, is because the shootings in May turned this into an “emergency.”

“So, you can see why Democrats love emergencies. Nothing gives them more power more quickly,” Carlson noted. And that power is applied unevenly.

As Carlson noted, George Soros-backed district attorneys who pursue progressive criminal justice policies have been surprisingly light on gun crime — as, indeed, they are on most crime. Between that and the anti-police sentiment unleashed during the Black Lives Matter riots of 2020, major cities continue to see a record number of killings.

But you likely won’t see red-flag laws applied willy-nilly there. Law enforcement is not its high point in urban areas right now.

Outside the cities it will be a different story. As Carlson noted, at least one gun-grabbing member of Congress wanted to red-flag a conservative pundit:

I am not in principle opposed to red flag laws. But when sitting congresspeople who screw Chinese spies suggest your right to self-defense should be removed because you oppose his political agenda, that undermines the trust necessary to support such laws. pic.twitter.com/k0sOHTzGRn

Carlson added that no one is “going to red-flag Hunter Biden, who lied on a federal drug form, was a drug addict carrying an illegally obtained weapon.”

And then there’s the asymmetrical nature of who gets to get their guns back if they’re red-flagged. Lawyers who specialize in Florida’s red-flag law, as Carlson noted, have gone on record as saying those who can higher legal counsel have “vastly higher” odds of having their firearms returned than those who can’t.

These are just a few of the issues with red-flag laws. They aren’t a compromise because they aren’t constitutional. They’re abused, especially by Democrats thrilled with grabbing a bit of power. They likely wouldn’t have stopped either of the recent mass shootings. They’ll be applied to the conservative and those of modest means, not the rich and the liberal. Most importantly, they’ll sweep due process away like it was nothing more than a scrap of paper.

This “common-sense” bit of gun control is anything but. Instead, it’s little more than a Trojan horse attacking the Second Amendment.

WE WILL NOT COMPLY! FJB& HUNTER TOO