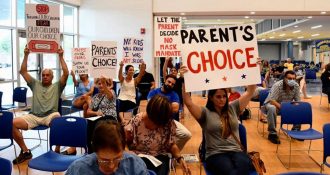 The following article, Half of America’s States Have Quit the School Board Group that Labeled Parents as Terrorists, was first published on .

With the departure of Nebraska making the 25th state to quit, the National Association of School Boards has now lost half of the United States.

At one time, the NSBA counted every state plus the Washington D.C. school district as members. But after labeling parents who were concerned about their kids’ education as “terrorists,” the group has shriveled to half its size and has lost tens of millions in revenue.

You’ll recall that back in Sept. of last year, NSBA demanded that Biden’s corrupt FBI begin investigating parents who were appearing at school board meetings across the nation and demanding that they stop teaching left-wing Critical Race Theory that calls all white people, Christians, Republicans, and conservatives racists.

The 25 states that have outright quit the once national organization leaves another 5 that have distanced themselves from the group.

Continue reading Half of America’s States Have Quit the School Board Group that Labeled Parents as Terrorists ...