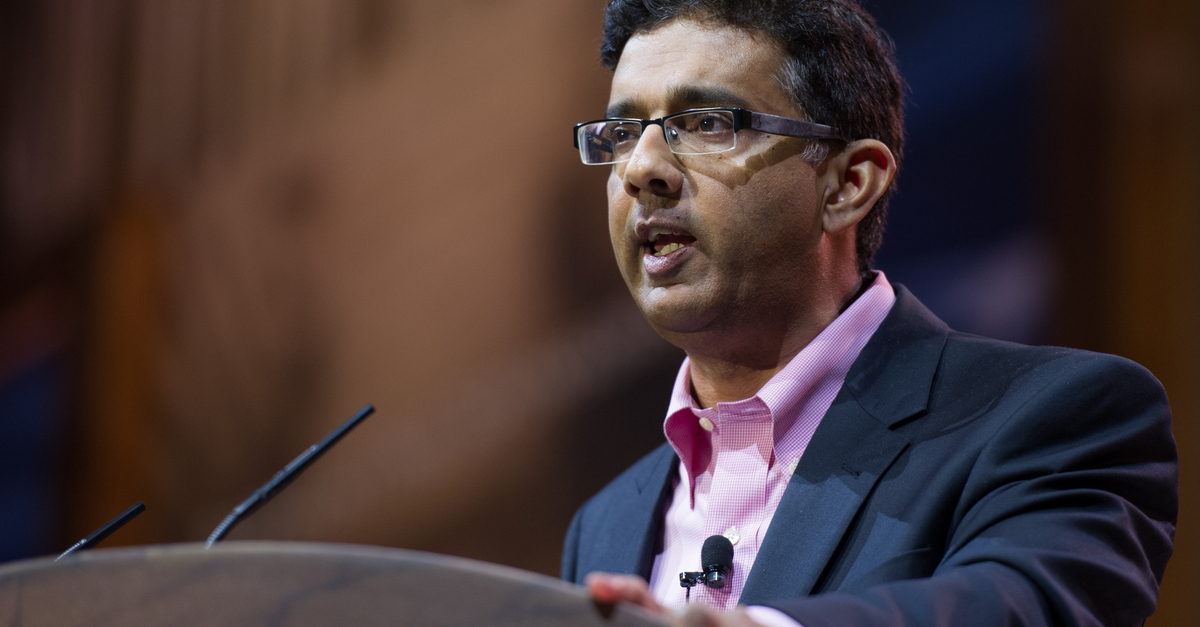 The following article, D'Souza Challenges Barr to Debate Him Over Claims Contained in '2000 Mules', was first published on Flag And Cross.

Conservative filmmaker Dinesh D’Souza is challenging former Attorney General William Barr to a debate over the findings in D’Souza’s documentary “2000 Mules” that questioned the integrity of the 2020 general election.

D’Souza threw down the gauntlet after Barr laughed when referring to the movie during a recorded deposition that was aired by the House January 6 committee Monday.

“My opinion then, and my opinion now, is that the election was not stolen by fraud,” Barr said.

“And I haven’t seen anything since the election that changes my mind, including the ‘2000 Mules’ movie,” he added, before he began to laugh.

Barr responded that the Georgia Bureau of Investigation had looked into the cellphone geotracking evidence used in “2000 Mules” by the vote integrity group True the Vote — which partnered with D’Souza in making “2000 Mules” — and was “unimpressed with it.”

New – last month, the Georgia Bureau of Investigation told the GAGOP + True The Vote that geolocation of cell phones near multiple drop boxes wasn’t enough evidence to warrant investigation into alleged ballot harvesting in 2020, according to a letter obtained by GPB News. pic.twitter.com/EMneLZJgmK

GBI Director D. Victor Reynolds wrote in a September letter to the chairman of the Georgia Republican Party David Shafer and True the Vote’s Gregg Phillips that the cellphone data True the Vote offered “while curious, does not rise to the level of probable cause that a crime has been committed.”

Barr was more dismissive in his review.

“The cellphone data is singularly unimpressive,” he said during the deposition, as the Washington Examiner reported. “I mean, basically, if you take two million cellphones and figure out where they are in a big city like Atlanta or wherever, just by definition you are going to find that many hundreds of them have passed by and spent time in the vicinity of these boxes.”

“And the premise if you go by five boxes or whatever it was that that’s a mule is just indefensible,” Barr concluded.

The level of ignorance displayed by Bill Barr here is truly stunning. He doesn’t seem to understand the very concept of geotracking. I’ll address this in detail on my podcast tomorrow https://t.co/zfEWm5gVCx

D’Souza responded in a series of tweets, including one that called on Barr to debate him.

“I’d like to invite Bill Barr to a public debate on election fraud. Given his blithe chuckling dismissal of #2000Mules this should be easy for him. What do you say, Barr? Do you dare to back up your belly laughs with arguments that can withstand rebuttal and cross-examination?”

I’d like to invite Bill Barr to a public debate on election fraud. Given his blithe chuckling dismissal of #2000Mules this should be easy for him. What do you say, Barr? Do you dare to back up your belly laughs with arguments that can withstand rebuttal and cross-examination?

The central premise of the documentary is that an illegal ballot harvesting scheme took place in the key swing states of Arizona, Georgia, Pennsylvania, Michigan and Wisconsin during the 2020 general election.

A “mule” is a term used in the movie for those who were allegedly paid to repeatedly pick up batches of ballots and place them in drop boxes.

On May 31, True the Vote’s Catherine Engelbrecht and Phillips testified before a group Arizona Republican state senators that they used cellphone geotracking data to identify people who made 10 or more drop box stops along with five or more visits to non-governmental organizations working on voter turnout during the 2020 general election.

“We wanted to focus on a very clear, narrow data set that showed what we would consider this extreme outlier behavior, and ultimately we settled on 10 times. The devices that we focused in on went to drop boxes 10 or more times,” she said.

“And here in Arizona they went an average of 21 times,” Engelbrecht added.

The Associated Press fact-checked “2000 Mules,” claiming True the Vote’s analysis was “flawed” based on false assumptions of how precise cellphone tracking data is, based on the fact people might frequently happen to go by drop boxes for other reasons, and based on the premise that others had business being there, such as election workers.

D’Souza made clear in a Monday Twitter post that for a mule to be counted in their analysis, he or she had to go to 10 different drop boxes during the election cycle, seemingly making it very unlikely their conduct was just coincidence.

“Is there anyone competent in cell phone geotracking who will defend what Bill Barr said? He insists that random people in a busy city going past ballot dropboxes cannot be distinguished from mules who each go on routes and stop specifically at 10 or more dropboxes. Is this true?” the conservative commentator wrote.

Is there anyone competent in cell phone geotracking who will defend what Bill Barr said? He insists that random people in a busy city going past ballot dropboxes cannot be distinguished from mules who each go on routes and stop specifically at 10 or more dropboxes. Is this true?

To further guard against accidentally picking up those who happened to pass by drop box locations regularly, True the Vote bought cellphone data from September, October and November, showing before, during and after election.

Only those whose cellphones placed them at drop boxes when voting was occurring were included in True the Vote’s data, the group said.

Mule gets frustrated after dropping ballots and returns to snap a picture of the drop box. #2000Mules pic.twitter.com/zVBF6NsfyF

In addition to cellphone data, Phillips said in “2000 Mules” that his group has 4 million minutes of surveillance footage from drop boxes it obtained through public records requests, allegedly showing the mules in action.

This is what stuffing the ballot box looks like pic.twitter.com/okpcKa9O4c

Footage is shown in the movie of alleged mules taking pictures of the drop boxes and delivering multiple ballots at one time.

Continue reading: D'Souza Challenges Barr to Debate Him Over Claims Contained in '2000 Mules' ...

I’m betting he won’t debate it… I heard some county somewhere (can’t remember where it was), called him about election fraud in 2020 and he told them to keep it quiet that he didn’t want to hear about it … more and more Barr sounds like a coward and won’t face the truth… So I don’t expect him to debate anyone about it….