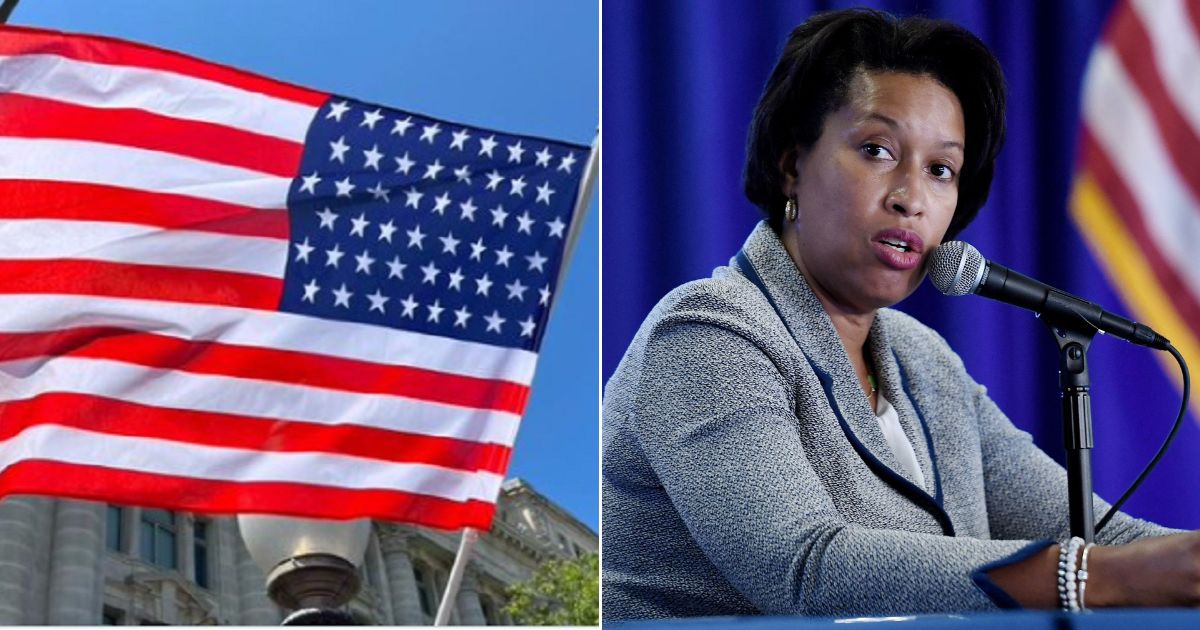 The following article, DC Mayor Orders Altered US Flags Flown on Patriotic Holiday, was first published on Flag And Cross.

Ahead of today’s observance of Flag Day, Washington, D.C., Mayor Muriel Bowser ordered flags with 51 stars to be raised in the district because “DC’s disenfranchisement is a stain on American democracy – a 220-year-old wrong that demands to be righted.”

In a statement posted to her government website on Monday, the mayor said, “Today, ahead of Flag Day, I directed our team to hang 51-star flags along Pennsylvania Avenue as a reminder to Congress and the nation that the 700,000 tax-paying American citizens living in Washington, DC demand to be recognized.”

Bowser noted that the “DC Admission Act” has been passed by the House and she called on the Senate to act.

The mayor also weighed in on the Supreme Court’s imminent ruling on a Mississippi abortion law that could overturn 1973’s Roe v. Wade  decision and expressed support for “common sense gun reforms.”

“We are at an inflection point for American democracy, and it is within the Senate’s power to do the right thing, embrace representation, and move DC statehood forward to the President’s desk,” the mayor concluded.

This #FlagDay, 51-star flags along Pennsylvania Ave will serve as a reminder to Congress and the nation that the 700,000 tax-paying American citizens living in DC demand to be recognized.

The Senate must do the right thing, embrace representation & send #DCStatehood to @POTUS.

Flag Day was established in 1916 to mark the anniversary of June 14, 1777, the day the Continental Congress adopted the flag of a fledgling nation, specifying it would have 13 stripes, alternating red and white, and 13 stars on a blue field, representing the 13 British colonies in rebellion against the British Empire.

Since then, stars have been added to the flag as new states have joined the union — not before they even exist.

how about doing something about violent crime in DC?

Desecrating the flag is a felony. There’s a reason DC isn’t a state, and as a mayor, you should know it. Embarrassing.

Average gas price is $5.25 a gallon and violent crime is at an all-time high. The mayor’s #1 concern is getting Democrats more votes/more power. Ok.

Democrats continue to push for D.C. statehood because they would gain two new senators and one representative, all reliably liberal.

In January 2021, Delaware Sen. Tom Carper, a Democrat, reintroduced a bill that would grant statehood to the district.

In a news release on his Senate website, Carper wrote: “Our nation’s capital is home to more than 700,000 Americans who, despite our nation’s founding mantra — ‘no taxation without representation’ — pay their share of taxes without full voting representation in either chamber of Congress. We must use our voices to call out this historic injustice and right this wrong. I am hopeful that we can finally come together to do just that this Congress.”

Because current Senate rules require a minimum of 60 votes to pass most legislation, Democrats would first have to abolish the filibuster. This would allow D.C. statehood (and other legislation) to pass by a simple majority.

Unfortunately for them, Senate Democrats Joe Manchin of West Virginia and Kyrsten Sinema of Arizona are both firmly opposed to ending the filibuster.