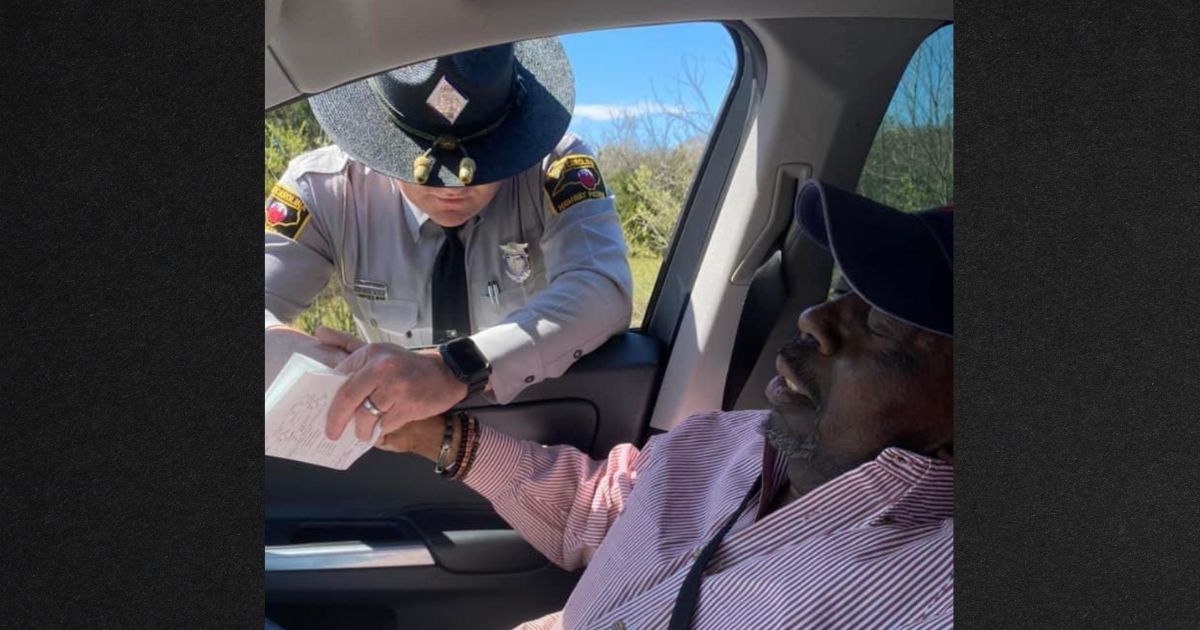 The following article, After Pulling Car Over, Officer Prays for Passenger, Then Places Cross in His Hand, was first published on Flag And Cross.

Not everyone has pleasant experiences when they’re stopped by police. Even the most law-abiding citizens can get pulled over for things they are unaware of.

But cops often have the choice to exercise grace, and according to one woman, the amount of grace shown in one memorable interaction was nothing short of amazing.

Ashlye V. Wilkerson, Ph. D., is a speaker, author, success coach and daughter. She recently lost her father, Anthony “Tony” Geddis, to cancer, but in one post she shared a heartwarming story about getting pulled over on the way back from a chemo appointment with her father on March 28.

“We heard a siren and saw a blue light coming behind us,” she shared on LinkedIn. “I immediately looked down and to the sign on my right to see what speed I was doing and the speed limit. I then realized that the speed limit changed from what I was previously going by.

“When asked by the officer, I apologized and admitted that I didn’t see the change in the limit. I immediately complied and provided my license and registration upon request.”

But her dad wasn’t about to sit by and let his daughter get a ticket.

“As you always did, you quickly jumped in to my defense,” her post continued. “Your voice was low as you were still a little weak from treatment. You shared with him that I was your baby girl and we were returning to SC from your cancer treatments in NC. The officer nodded and went back to the car.”

He took a long time back at his vehicle, and Wilkerson worried about what that might mean, but she never would have guessed the reason for the long wait.

“When he came back, he asked you if he heard correctly that you had cancer,” she wrote. “Once you confirmed, the officer took a deep breath. He sighed and said that he too had loved ones who battled cancer as well.

“He asked if he could pray with you. You welcomed the prayers with gratitude and informed him that you’re a deacon of your church. You proudly shared your love for Christ and your belief that God’s will would be done.

“When you all were done, there was a small silver cross that he placed in your hand for you to keep with you as a symbol of your faith.”

Later, Wilkerson told her father that she had been speeding and would have accepted the ticket and paid the fine without complaint, but her father refused, saying he didn’t want that on his conscience.

She got off with just a warning, but the two left the interaction with full hearts.

The trooper, Jaret Doty with the North Carolina State Highway Patrol, later told CNN that he could immediately tell that something was wrong with Geddis, based on his body language and the pouch he was wearing. He could also tell that the father was trying to protect his daughter, and as a father to a daughter himself, he recognized and respected the desire.

Doty had also experienced serious health issues after being diagnosed with ulcerative colitis, and as he was recovering, he promised that he would do his utmost to help others in similar situations.

“I said that if I could touch one person, or help somebody get through their illness, I would do it,” he recalled thinking.

And he got his opportunity on that day in March, when he pulled over Wilkerson and met Geddis, which is why he spent so long back at his car, recognizing the opportunity he’d been given. He said it was the first time he’d prayed for someone out loud on the interstate.

“It’s just one of those things I can’t explain,” he said.

Wilkerson also managed to catch the sweet moment between the officer and her father — something her father didn’t know she did, but now it’s a dear reminder of her late loved one.

“You didn’t know I captured this picture in the moment but I did it so it could continue to remind me of two things:

“1- You always protected me even through your final days; and 2- You were a fighter, firm believer in Christ, and a praying warrior.

“I’m so grateful for your love, guidance, and example. Heartfelt thanks to this officer who prayed for and with you that day.”

Continue reading: After Pulling Car Over, Officer Prays for Passenger, Then Places Cross in His Hand ...