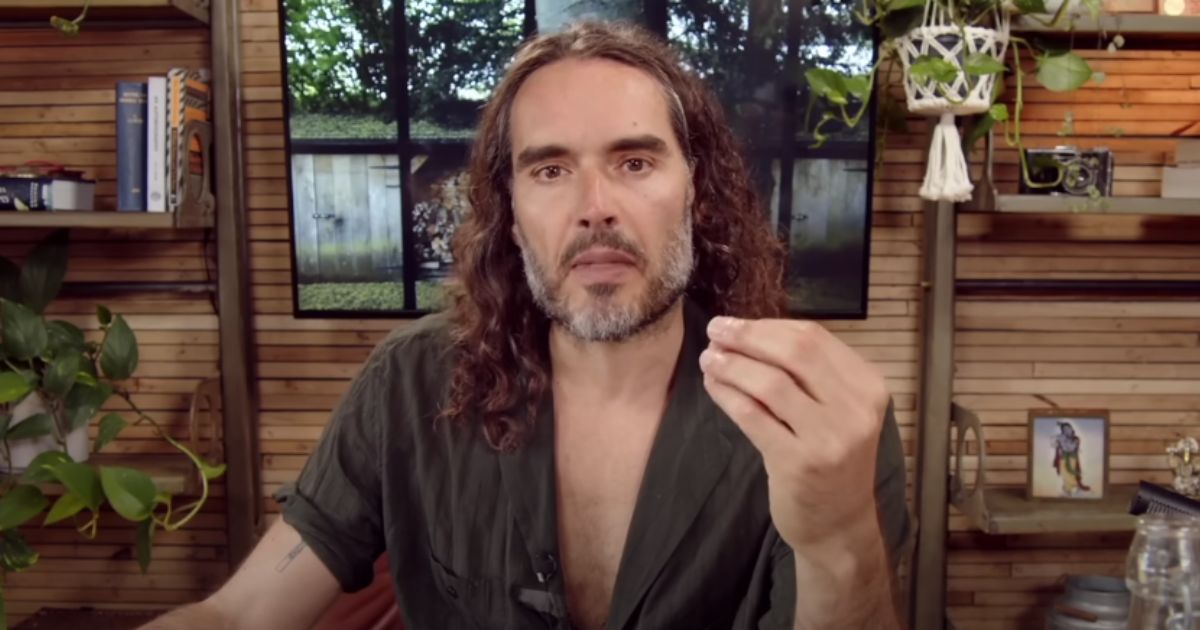 The following article, Massive Lib Celeb Who Said Trump Was Right About Hillary Just Called Out Klaus Schwab's Plan, was first published on Flag And Cross.

“Russell Brand, an actor typically known for his more liberal political opinions, is starting to lean heavily into right-wing conspiracies on his YouTube channel, leaving fans flummoxed and upset,” said a writer at a left-leaning media site, The Wrap.

In a new video, Brand took aim at the head of the World Economic Forum Klaus Schwab and leaders of big pharma. In often hilarious fashion, he called out these masters of the universe for their disingenuousness.

The video featured Brand commenting on a discussion between Schwab and Pfizer CEO Albert Bourla that occurred during the WEF annual meeting on May 25 in Davos, Switzerland.

“You’re able to watch an agenda being established at a WEF conference in real-time,” Brand told his viewers.

“This is a demonstration of how power operates, or at least non-official power. It’s not concealed.” Referring to his previous interview with NSA whistleblower Edward Snowden, Brand paraphrased, “‘The worst conspiracies are … things that you can see. You’re being spied on, everything’s run economically, regulation is set from centralized organizations.’ You can watch it happen, they’re [Schwab and Bourla] having a conversation on the bloody telly.”

But “they don’t call it conspiracy, they call it cooperation.”

Brand elaborated on how lucrative the COVID-19 vaccine has been for Pfizer. It was a literal cash cow for the company in 2021 and continues to be. Pfizer reported total 2021 revenue was $81 billion versus roughly $42 billion in 2020.

Brand cited a February op-ed written by Nick Dearden, the director of Global Justice Now, a London-based social justice organization titled, “Putting Big Pharma in Charge of Global Vaccine Rollout Was a Big Mistake.” The piece was published by The Guardian.

Dearden argued that “Covid-19 has been a PR coup” for big pharma.

“The global vaccine rollout has created levels of inequality so great that many call it a ‘vaccine apartheid’,” Dearden wrote. “Pharmaceutical corporations like Pfizer have led this rollout, setting the terms by which they sell vaccines and deciding who to prioritise. Ultimately, their approach affects who does, and does not, receive vaccines.

According to Dearden, “The company claims that its vaccine costs just under £5 [$6] per dose to produce. Others have suggested it could be much cheaper.  … The U.K. government paid £18 [$22] a shot for its first order, £22 [$27] for its most recent purchase.

“It has been claimed that the company initially tried to pitch their medicine to the U.S. government for an eye-popping $100 a dose. Tom Frieden, a former director of the U.S. Centers for Disease Control and Prevention, accused the firm of ‘war profiteering.'”

“Pfizer has sold the vast majority of its doses to the richest countries in the world — a strategy sure to keep its profits high. If you look at its global distribution, Pfizer sells a tiny proportion of its vaccines to low-income countries. By last October, Pfizer had sold a measly 1.3 percent of its supply to Covax, the international body set up to try to ensure fairer access to vaccines.”

After reading portions of Dearden’s piece, Brand asked, regardless of how one feels about the vaccines, “Shouldn’t they [the vaccines] have been made readily available in poorer countries, or does it only matter that richer countries have access to that medicine?”

And then Brand drops the bomb. He declared that “Science follows the money.”

Brand explained, “There’s a problem there, particularly when these ideas are couched in neoliberalist politics. They’re all about fairness and sharing and kindness and whenever there’s any cynicism and doubt, you’re a conspiracy theorist, you’re a Nazi, you’re against progress, follow the science. We’ve just heard, the problem with following the science is that the science follows the money. That’s the issue. Science is a subset of commerce.

“Truly objective science, as is being suggested here, independent networks focused on scientific endeavor, of course we want that. You’d have to be an idiot to sort of deny the effectiveness of bloody geniuses in laboratories looking at cells and examining the behavior of viruses and medicines.

“But science within extreme commercial and financial imperatives, we just accept as normal because none of us appreciate the water that we swim in. … But it’s a problem when you present it as medically effective, socially responsible, personally necessary,” he concluded.

“There are many, many questions that are left unanswered and not questioned that are going to be asked by Klaus Schwab at the bloody Davos WEF puff-piece factory that’s primary intention, it seems to me, is to create a globalist technocracy, limit your individual power, your community collective, even national power.”

He nailed it when he said Schwab wants a global system that limits personal freedom and national power. That comment alone is sure to make liberal heads explode.

What does it say when a somewhat out-there movie star makes more sense than the vast majority of the establishment media?

Brand’s honesty is refreshing and it would be nice to hear something resembling the truth from members of the liberal elite. But for them, maintaining their hold on political power trumps the truth.

And it really is just as simple as that.