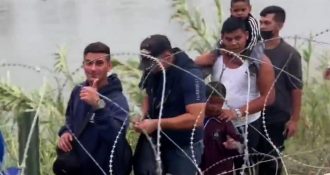 The following article, A Federal Court Has Again Ruled that Biden Has to Stop Releasing Thousands of Illegals Into the U.S., was first published on .

Another federal judge in Texas has ruled against Joe Biden’s disastrous immigration policies and has said that he must stop releasing tens of thousands of illegals into the U.S.A.

U.S. District Judge Drew Tipton issued a 96-page opinion in favor of Texas and Louisiana vacating a memorandum issued by Department of Homeland Security Alejandro Mayorkas. The judge said Mayorkas’ policy was “arbitrary and capricious, contrary to law, and failing to observe procedure under the Administrative Procedure Act.” Tipton also denied all other requested relief brought by the administration.

The ruling comes after law enforcement officers involved in Texas’ Operation Lone Star have made a record number of arrests of violent offenders with cartel and gang connections.

“I just dealt Biden another massive defeat in fed court,” Texas Attorney General Ken Paxton said in a statement. “He tried to throw out immigration law, saying DHS didn’t have to detain criminal illegals. The court now says he must. I will always hold the line with the Dems and the rule of law.

“Joe Biden is more focused on abandoning our laws than enforcing them, and it’s clear he cares more about his radical-liberal ideology than the lives of hard-working Americans,” Paxton added.

Biden is not accidentally flooding America with uneducated, unhealthy, disease-ridden, moochers who will steal billions in welfare from all of us.

It is a feature of his plan, not a problem, as far as he is concerned.

Continue reading A Federal Court Has Again Ruled that Biden Has to Stop Releasing Thousands of Illegals Into the U.S. ...

When did the law start meaning anything to Biden? This from a guy who bragged about having put together the most extensive & inclusive fraud organization in history. (Oct 25, 2020)
He and his followers want all the illegals pouring into the US from every 3rd world Hellhole on the planet. Anything goes if it helps destroy America even faster so their agenda of a Socialist/Communist can be put in place with them in charge of everything. Some say about 48% of Americans agree with him. I say that may be a bit high, but time will tell.