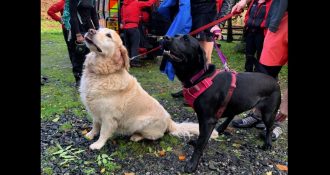 An animal shelter in Southern California has told legal gun owners and NRA members that they cannot adopt any animals there.

Shelter Hope Pet Shop owner Kim Sill is now openly telling potential pet owners that if they are supporters of the Second Amendment, no pets for you.

“We do not support those who believe that the 2nd amendment gives them the right to buy assault weapons,” Sill wrote on a website for the shelter in Thousand Oaks, California, about 40 miles northwest of Los Angeles. “If your beliefs are not in line with ours, we will not adopt a pet to you.”

Sill added, “If you lie about being a NRA supporter, make no mistake, we will sue you for fraud.”

Sill, in an interview with NBC News, said quite a few donors to her shelter are Republicans and some have threatened to cut off funds if she doesn’t remove the “Where do you stand on gun control?” question that she now requires every potential adoptee to answer during a screening interview.

This is how scumbag Democrats act. Conservatives, you aren’t just wrong about politics as far as the left is concerned, you are a bad person who needs to be eliminated from society.