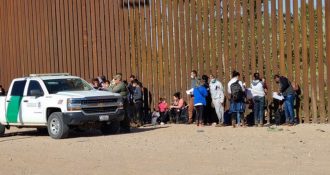 The following article, Biden Set to Enlarge Program of Dumping Illegals in Cities Across the Country, was first published on .

Biden has been dumping tens of thousands of illegals in cities across America, but now he’s ready to enlarge the program and to start sending more illegals to more American cities.

According to NBC News, Biden is starting to plan for another surge in illegals, and he wants to send them into more cities than ever. And Biden is jokingly calling it the “Abbott Plan,” as a jab against Teas Governor Greg Abbott after the Texan sent several busloads of illegals to D.C.

Migrants who are applying for refugee status are allowed to stay in the United States while their applications are being processed. Officials expect a massive surge of migrants after Biden cancelled the “stay in Mexico” policy put in place under the Trump administration in order to prevent the spread of COVID-19.

A DHS spokesperson said to NBC News only that a final decision on the policy had not yet been made.

“Should a decision be made,” said the spokesperson, “DHS will continue to closely coordinate with and support cities and NGOs to facilitate the movement of any individual encountered at the Southwest border who is placed into removal proceedings pending the next steps in their immigration proceedings.”

The lawless Biden administration, folks. Spreading uneducated, COVID infested, illegals all across the country by the millions.

Continue reading Biden Set to Enlarge Program of Dumping Illegals in Cities Across the Country ...