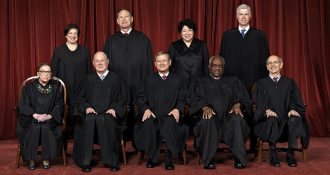 An armed, left-wing, domestic terrorist was arrested near the home of Supreme Court Justice Brett Kavanaugh’s Maryland home on Wednesday.

The man, identified as Nicholas John Roske, was arrested at about 1:50 a.m.

“The man was armed and made threats against Justice Kavanaugh,” Supreme Court spokeswoman Patricia McCabe said in a statement. “He was transported to Montgomery County Police 2nd District.”

This leftist terrorist said he wanted to kill Kavanaugh after the draft opinion on abortion was leaked to the public by a criminal leaker.

Roske of Simi Valley, California, was carrying a gun, knife and pepper spray when arrested and had made violent threats against Kavanaugh, sources said. Roske was picked up on a nearby street after calling police on 911 to report himself.

A criminal complaint obtained by Fox News shows that Roske is being charged with attempting to murder a United States Supreme Court Justice. He is scheduled to have a first appearance in federal court in Maryland Wednesday afternoon.

He told officers that he wanted “to give his life purpose” and purchased the gun and other items for the purpose of breaking into Kavanaugh’s home and killing the justice and then himself. Roske admitted in a second interview with the FBI of his intent to kill Kavanaugh and himself, according to an affidavit in support of the criminal complaint.

Roske told detectives that “he was upset about the leak of a recent Supreme Court draft decision regarding the right to an abortion as well as the recent school shooting in Uvalde, Texas,” and believed Kavanaugh “would side with Second Amendment decisions that would loosen gun control laws,” according to the affidavit.

Once again, we see that the real terrorists in the USA are liberals.