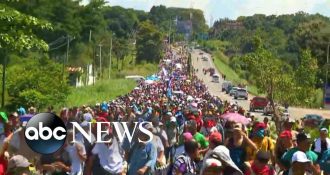 The following article, Biden Releases 7,000 Illegals with COVID Into the U.S., was first published on .

Despite rules that are supposed to prevent it, Joe Biden’s admin. has released more than 7,000 illegals who are infected with COVID into the U.S.A.

Biden is violating Title 42, a rule to prevent just this sort of thing. The rule is meant to keep illegals from spreading COVID into the U.S., and yet, here is Biden letting thousands of infected criminals into this country.

The Texas border city of McAllen says more than 7,000 COVID-positive migrants have been released into the city since February, and more than 1,500 in the past week — the latest example of growing concern about the potential impact of the border crisis on efforts to control COVID-19 in the U.S.

In a statement announcing the building of new temporary shelters to deal with a “rapidly escalating” surge of immigrants being released into the border city, McAllen warned of the release of thousands of migrants with COVID-19.

“Since mid-February of 2021 there have been over 7,000 confirmed COVID-19 positive immigrants released into the city of McAllen by [Customs and Border Protection], including over 1,500 new cases in the past seven days,” the statement said.

Immigrants released by CBP are dropped off with Catholic Charities and tested for COVID by a third party. If they test positive, they are asked to quarantine and offered a room at a quarantine site.

Now, wasn’t Biden the one said he was America’s OVID savior?

Didn’t he say he was going to end COVID?

And now he’s purposefully releasing thousands of illegals with the virus?

Continue reading Biden Releases 7,000 Illegals with COVID Into the U.S. ...

It could be worse. They could have Leprosy and yes, the disease is still around. Biden intends to get anyone or anything that dares to disagree with his Socialist/Communist agenda. What is being done to American citizens goes far beyond selling your soul and your country for money, power and votes.
I will never believe Biden received more votes than any President in the entire history of America!