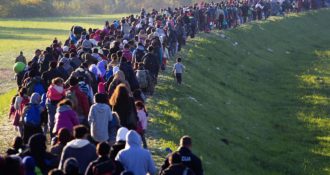 The following article, Largest Illegal Migrant Caravan Ever Headed to U.S. Through Mexico, was first published on .

The largest illegal migrant caravan in history is now starting its movement through Mexico as Joe Biden continues to destroy America’s immigration system.

Biden’s massively failed policies has once again thrown the door to our southern border to tens of thousands more illegals. After millions have already flooded across our border to get billions in freebies from the Biden administration, millions more sit in wait for their turn at the taxpayers’ trough.

About 15,000 migrants have gathered in Tapachula, a city on the Mexico-Guatemala border, preparing to march through Mexico, according to the Guardian.

This 15,000 is a drop in the bucket of the illegals Biden has allowed to just waltz into this country in violation of our laws.

More than 234,000 migrants were intercepted at the southern border in April, breaking the previous month’s 22-year high of 221,000, according to NBC News.

Chris Chmielenski, vice president of NumbersUSA, told Newsmax that the No. 1 priority for Biden and lawmakers should be reinstating the Migrant Protection Protocols (MPP), known as “remain in Mexico,” that was in place under Trump.

MPP resulted in migrants who arrived at the southern border being sent back to Mexico while their immigration proceedings played out.

Joe Biden is doing his level best to destroy America on every level.