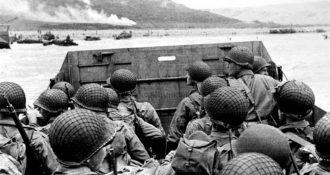 The following article, Joe Biden Says Nothing About D-Day, Pushes His Radical Agenda Instead, was first published on .

On the anniversary of the day Allied Forces launched its D-Day operations that marked the beginning of the end for Nazi Germany in WWII, Joe Biden ignored the important event, opting instead to continue pushing his radical, anti-American agenda.

Instead of memorializing the start of D-Day, June 6, 1944, Biden hit social media on Monday morning to push his B.S. gun banning issue.

After Columbine,
after Sandy Hook,
after Charleston,
after Orlando,
after Las Vegas,
after Parkland,
nothing has been done.

This time, that can’t be true. This time, we must actually do something.

The White House again tried to boast about the strength of the American economy on Biden’s watch and also tried to reassure Americans he was working to get more baby formula into the country, as shortages continue.

But there was no mention of D-Day from the president on his social media accounts, his press statements, or publicly. The White House did not even address D-Day during the daily press briefing.

The president spent the day at the White House behind the scenes and did not appear publicly at all.

The White House called a “lid” for the day’s activities at 4:36 pm.

Even by 8 p.m. eastern time, the Biden’s Twitter had not mentioned D-Day. The White House Twitter feed also ignored the anniversary of D-Day.

This is how ignorant, how anti-American Joe Biden really is.

Continue reading Joe Biden Says Nothing About D-Day, Pushes His Radical Agenda Instead ...