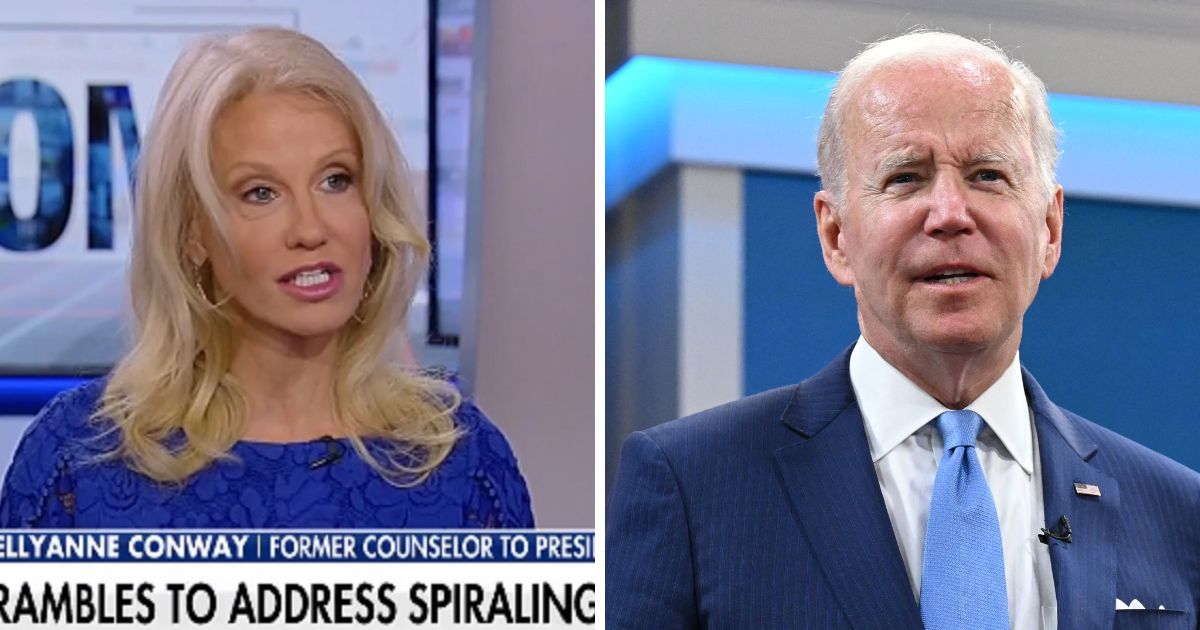 The following article, Kellyanne Conway Dissects Biden's Entire Presidency with a Single Sentence, was first published on Flag And Cross.

When it comes to dissecting Joe Biden’s disastrous presidency, Kellyanne Conway will be tough to beat.

The former adviser to President Donald Trump, and a key reason he defeated Hillary Clinton in the 2016 presidential campaign, had a chance Thursday during an appearance on Fox News’ “America’s Newsroom” to explain the manifold failures of an administration Americans have been dealing with for a year and a half.

It was as perceptive as it was pitiless.

The sentence came about five minutes into her interview, while Conway was discussing Biden’s increasingly pathetic reactions to the inability of his own White House to get any kind of handle on the problems that are plaguing Americans today.

Check it out here:

First, Conway said Biden is showing his true nature as a “creature of Washington of 50 years,” a man who’s spent almost his entire adult life in the make-believe world of government.

Then she got to the real issue and summed up the administration in one sentence:

“Number two, he sounds like somebody who never takes responsibility and accountability,” she said.

Anyone digging even a little into the headline-generating problems facing the American people won’t get too far down before finding Biden and his political party’s platform at the root.

A country that attained energy independence two short years ago is facing soaring gas and oil prices under a president who made it Job 1 to declare war on the fossil fuels industry. Yet Biden goes hat-in-hand to OPEC nations to ask them to produce more oil — and gets ignored.

A president who’s country is experiencing a wave of violent crime unseen in decades is the alleged leader of a political party that has spent years attacking the nation’s law enforcement and pretending criminals are actually victims of police.

The disorder running rampant in Democratic-controlled cities is as predictable as the sunrise, but Biden and his minions in politics and the mainstream press pretend the Second Amendment and law-abiding gun owners are somehow the problem.

The current flood of illegal immigration — periodically knocked out of the news cycle by other problems of Biden’s creation — is the direct result of the current president’s juvenile, near suicidal, determination to undo every one of his predecessor’s policies, no matter what the ramifications are to his own citizens and his sworn constitutional duty to “take Care that the Laws be faithfully executed.”

The inflation that’s eating away at Americans’ incomes can be traced to the American Rescue Plan that Biden’s Democrats passed — without a single Republican vote — and Biden signed, in a fit of one of his Walter Mittyesque “I can be FDR” moments.

Even the Russian invasion of Ukraine, which Biden most likes to blame his woes on, was arguably fostered — and certainly not prevented — by Biden’s own ham-handed handling of the crisis in the lead-up to the actual fighting. (Do Democrats or the mainstream media remember Biden effectively green-lighting Russian President Vladimir Putin’s invasion? Do Democrats or the mainstream media remember that Putin didn’t invade anyone when Donald Trump was president?)

And in other foreign policy failures, Biden has never been assigned, or taken, full responsibility for the eternal shame of the Afghanistan withdrawal, an act of calculated cowardice that has stained American credibility for generations. Even being interviewed by Democratic hack/ABC talking head George Stephanopoulos, Biden tried to shift blame for the ignominy on faulty advice from his military.

It’s not a surprise that, as Conway put it, a “creature of Washington of 50 years” should behave this way. Biden spent 35 years as a senator fantasizing about being president but never being held individually responsible for the acts of the legislative body. (Senators rarely are, unless the mainstream media have a need to further the Democratic agenda — just ask Joe Manchin.)

Now that he’s in the biggest job in Washington, as Conway said, “he sounds like somebody who never takes responsibility and accountability.”

He can’t take responsibility now, because if he did, he’d have to acknowledge that he and his party are wrong on literally every point of public discussion.

The mainstream media will never acknowledge that. But Kellyanne Conway just laid it out.

And come the November midterms, American voters who care about their country will be able to let Democrats know what they think — and kick them out of power.

Responsibility? The answer to every DemoSocialist failure (and they are countless) is: “Blame Trump!”