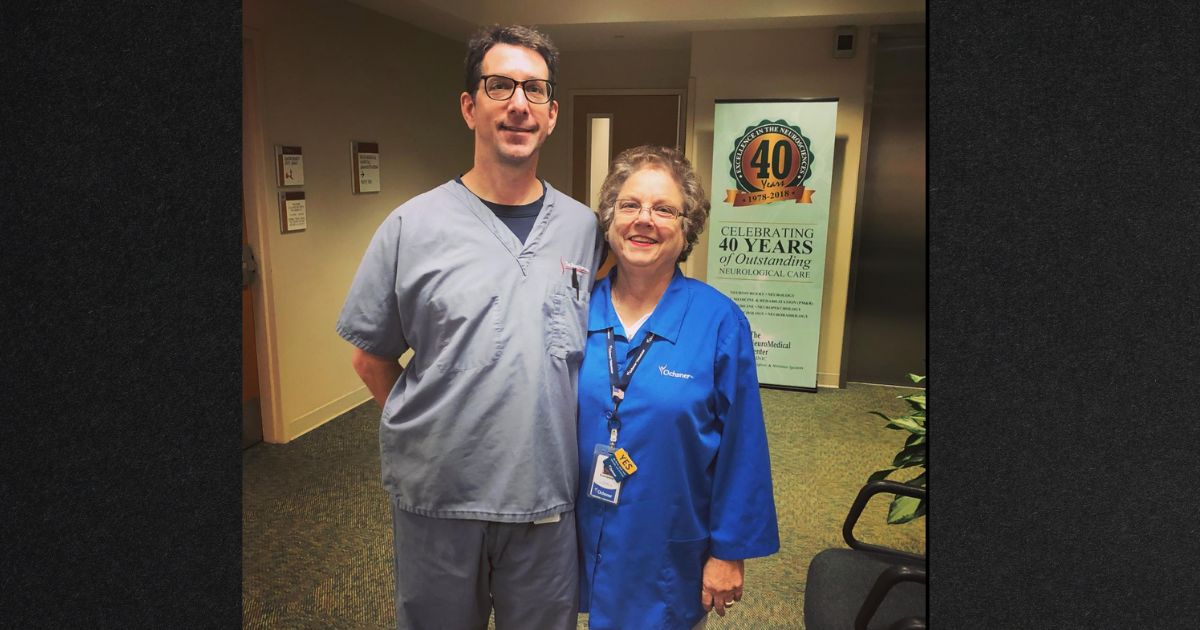 The following article, ER Doctor Credits God for Miracle Recovery of Woman on Brink of Death, was first published on Flag And Cross.

Lorraine Besson is a firm believer in miracles. She claims she is one, after a series of life-changing events she experienced in March 2016.

“I know that Jesus is alive and well today and that He does still do miracles,” Lorraine Besson told the Christian Broadcasting Network. “I’m proof of that. I should not be sitting here telling you my story. It was only through the intervention of God. He had his hand on it from the beginning to the end, from the ambulance all the way to surgery where I was then able to breathe and not in danger.”

The trouble began during what was supposed to be a low-risk spinal fusion surgery. Everything seemed to be going well until the next morning, as she was recovering at home.

“I was worried about Lorraine,” Besson’s sister Angela recalled. “It was a serious surgery where they had to go in, you know, from the front to work on her back. And it seemed to go okay and then it was … when she was at home later … that things kinda went south.”

Besson was experiencing such significant breathing issues that an ambulance was called to transport her to the hospital. Her condition continued to deteriorate.

“When we heard that 911 had been called and she was on her way to the emergency room, my immediate response was to pray,” Besson’s brother Neal said. “One of her children saw her come out of the ambulance at the hospital and she said that she totally looked lifeless, that was very alarming to hear, so I knew it was a critical situation.”

Besson said she went into cardiac/pulmonary distress. She had no airway and her daughter saw her lifeless body on a stretcher while a doctor performed CPR.

“My daughter, Sheri, said she never wanted to see anything like that again,” Besson told the Baton Rouge Christian Life Magazine. “She just knew I was dead.”

Besson’s family was sure they would lose her, but they started praying fervently.

Dr. Lura Wight, who was one of the first to respond to Besson, said that even as a medical professional the situation did not look promising.

“For emergency medicine physicians, one of the scariest emergencies we see is lack of an airway,” she explained. “When I saw her, I knew we’d better do something and do it quick because she was going down fast.”

One of the more obvious options that Wight considered was making an incision to help Besson breathe, but something — or rather, someone — stayed her hand, and she soon found out why.

“And it was quite obvious to all of us that she needed to be intubated,” Dr. Wight said. “I looked at her neck and I just had this sense of foreboding that — that told me just ‘This is not an option. This is not a viable option to get an airway on this patient.’

“And I just — we were able to keep her oxygenated while we were waiting for anesthesia to get there and I chose to do that rather than make an incision in her neck.”

It turned out that Besson was suffering from a hematoma completely covering her airway.

“She had a nick in her thyroid artery and the blood was slowly leaking out of that artery into her neck,” Dr. Wight said. “Had we put an incision in her throat anteriorly to put a breathing tube in, she quite frankly could have bled to death right there on the table.”

After surgery, a 5-day-long drug-induced coma, a 10-day stay in the ICU, and a 24-day stay at the hospital, Besson faced months of rehab. At first, neither the doctors nor the family knew if she’d ever be her old self again — but they kept praying.

“I thought for sure without oxygen for that long she was going to have severe damage, you know, to her cognitive functioning,” Angela admitted.

“She was having difficulty the first few days even recalling … what she did even the previous hour,” Dr. Martin Setliff, who worked with Besson while she recovered, said. “And she also had a mild component of an anoxic brain injury, which indicates that in the period of time that her airway was blocked she was unable to get adequate blood flow to her brain. I did have concerns that given the nature of her injury and the severity of it, that her time in our unit could be anywhere from three to four weeks possibly. She fortunately was able to undermine my original estimation and she got out of the rehab unit within about 13 days.”

Despite every difficulty and unknown Besson faced, she did eventually make a full recovery — a fact she’s absolutely certain is a result of divine intervention.

Besson cites several miracles in her case that resulted in such a shocking outcome.

She’d had an ER doctor in the ambulance with her — that was rare.

The doctor was convinced not to perform the tracheotomy, which would have been a normal route of treatment.

And finally, she’d suffered none of the typical long-lasting brain or physical damage associated with restricted airflow.

As a result of her miraculous recovery, Besson has made sure to publicize her appreciation for the physicians who cared for her, as well as her faith in the God who kept her alive.

“I asked myself, ‘What gift do you buy for the doctors who helped save your life?'” she said. “I found special beautiful white-washed standing crosses. I bought the same cross for myself, so I could remember who helped save me: Jesus and all the doctors.”

“It’s been five years since this happened, and I still will ask people, strangers, ‘Would you like to hear my miracle story?'” she continued. “And I can’t tell you how many times I’ve told them my story and then they say, ‘Thank you so much for telling me your story, I needed to hear that today.'”

It was certainly a blessing to her doctors as well — and only more evidence of a creator who numbers our days.

“I am a firm believer in if God is ready for you, you will go, and if God is not ready for you, you aren’t going anywhere,” Dr. Setliff said. “And I’ve seen this happen time and time again. I’ve had people walk into my ER and six hours later they’re on a vent, deathly ill, and die. I’ve had them come like Miss Besson, critically ill, on death’s door, and end up walking out of the hospital two weeks later.

“In all of this, physicians play a role, but the ultimate decider of who survives and who does not is God.”