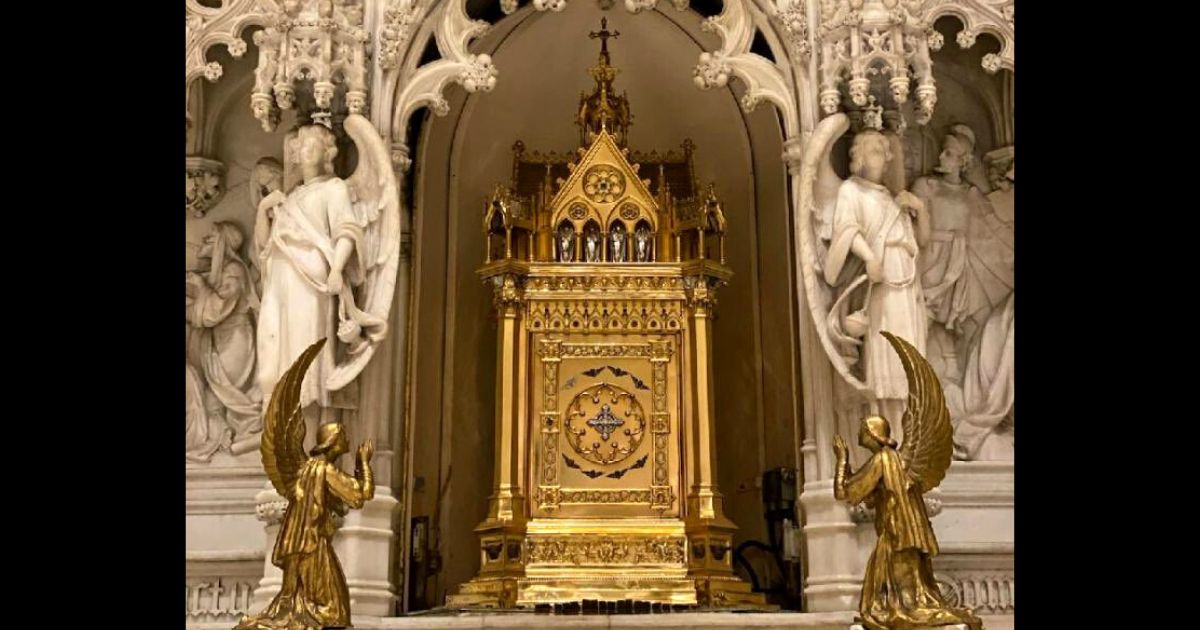 The following article, $2M Gold Treasure Stolen from Church in Brooklyn, was first published on Flag And Cross.

Crime has been surging for over a year in President Joe Biden’s America, and Democrat-led areas such as New York City are getting the worst of it.

Criminals have breached houses of worship, as a church in the city’s Brooklyn borough found out in devastating fashion.

According to The New York Times, a $2 million gold tabernacle was stolen last week from St. Augustine Roman Catholic Church in Brooklyn.

Someone apparently used a power saw to detach the tabernacle from its foundation, which dated back to the 19th century, the Times reported. Police said the crime occurred sometime between May 26 and Saturday.

“The burglar cut through a metal protective casing and made off with the Tabernacle, which dates back to when the church was built in the late 1800s,” the Diocese of Brooklyn said in a news release on Sunday. “This holy sacramental receptacle is irreplaceable due to its historical and artistic value.

St. Augustine’s was supposed to have security cameras, but they were not functioning properly at the time of the theft.

Father Frank Tumino, who serves as pastor at both St. Augustine and St. Francis Xavier Church in Brooklyn, said the thief also stole the digital recorder that would have stored the security videos.

The diocese has faced a number of challenges recently, the Times reported. Fewer people are attending church since the COVID-19 pandemic began in early 2020, meaning the churches are receiving less and less money.

Since priests like Tumino are having to lead multiple congregations, some buildings are left empty and unwatched for days at a time.

This was likely a contributing factor in the theft of the tabernacle at St. Augustine’s.

“Understand: These parishes have been decimated,” Tumino told the Times.“These parishes need between $10 million and $15 million worth of work.”

“I’ve been entrusted with doing that, and there is not that money available, so you have to choose what you can pick and do now,” he said.

The $2 million tabernacle was designed by Brooklyn architect Alfrid Parfitt in the 20th century. He and his brothers, Walter and Henry, were recognized in the borough for creating some of the famous brownstones that adorn various buildings in the area, the Times reported.

Parishioners of the church donated various jewelry and precious metals in 1888 to be used in the construction of the tabernacle.

“It’s probably the most elaborate tabernacle in the country,” Father Robert Whelan, a former St. Augustine’s pastor, said in 2013.

According to the Times, a diocese spokeswoman confirmed the tabernacle was insured. However, she did not say who ensured it, nor to what monetary level it was insured.

The @BrooklynDiocese is announcing the #NYPD is investigating a brazen crime of disrespect and hate, which desecrated the most Holy Eucharist and altar at @StAugustineRC located in Park Slope. The burglar cut through a metal protective casing and made off with the Tabernacle. pic.twitter.com/hMbLoSSkWa

Maryann Taranto said St. Augustine’s had been her main parish for 35 years, and the recent string of atrocities in America have left her mystified.

“For somebody to come in and desecrate our church is a horror,” Taranto said. “I don’t know anymore.”

While it would be unfair to attribute all of these problems directly to Biden, he sets the tone and bears responsibility as the president of this country, and he and his fellow Democrats have endorsed or adopted a lax approach to crime in recent years.

Such leadership is hurting Americans in every corner of the United States, and this robbery in Brooklyn is simply the latest example.