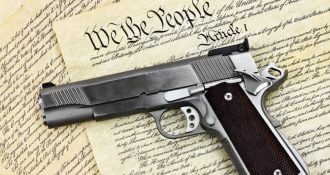 The following article, Gun Sales Soar Past One Million Sold for 34th Straight Month, was first published on .

Gun sales in the U.S. have clocked in at over a million guns sold for 34 straight months, a report says.

According to the latest numbers released by the FBI, background checks for May totaled 2,349,383, the third-highest ever for a May. The Bureau added that 1,174,791 were directly tied to the sale of a firearm.

“Background checks for firearm sales remain strong. May marks 34 months that background checks for the sale of a firearm exceeded 1 million,” said Mark Oliva, spokesman for the National Shooting Sports Foundation, which represents gun-makers, according to the Washington Examiner.

“Americans continue to buy firearms for personal safety. These gun owners are law-abiding Americans who use their firearms for lawful purposes daily,” he added.

Oliva continued saying that those purchasers “reject the attempts by special interest groups to paint them with the same broad brush as those who criminally misuse firearms. The tragic events in Buffalo, New York, and Uvalde, Texas, are sobering reminders that there are those in our society who have no respect for the law or innocent lives. Every law-abiding adult American has the right to defend themselves and their loved ones against that evil.”

Justin Anderson, the marketing director for Hyatt Guns of Charlotte, North Carolina, one of the nation’s biggest and a regular Secrets source of gun sales intelligence, recently told us, “Unprecedented numbers of new gun buyers over the last two years equals more people seeing the lunacy of many of [the] gun laws in this country, including those governing concealed carry. This has strengthened the ranks of pro-gun citizens in this country, and many have been talking [to] their representatives, who have responded by getting rid of permit requirements. As a gun owner, I’m delighted to see the needle moving the other direction regarding our Second Amendment rights. These laws are also good for business, as more law-abiding citizens buy guns. Most importantly, these laws are an exceptional deterrent to violent crime.”