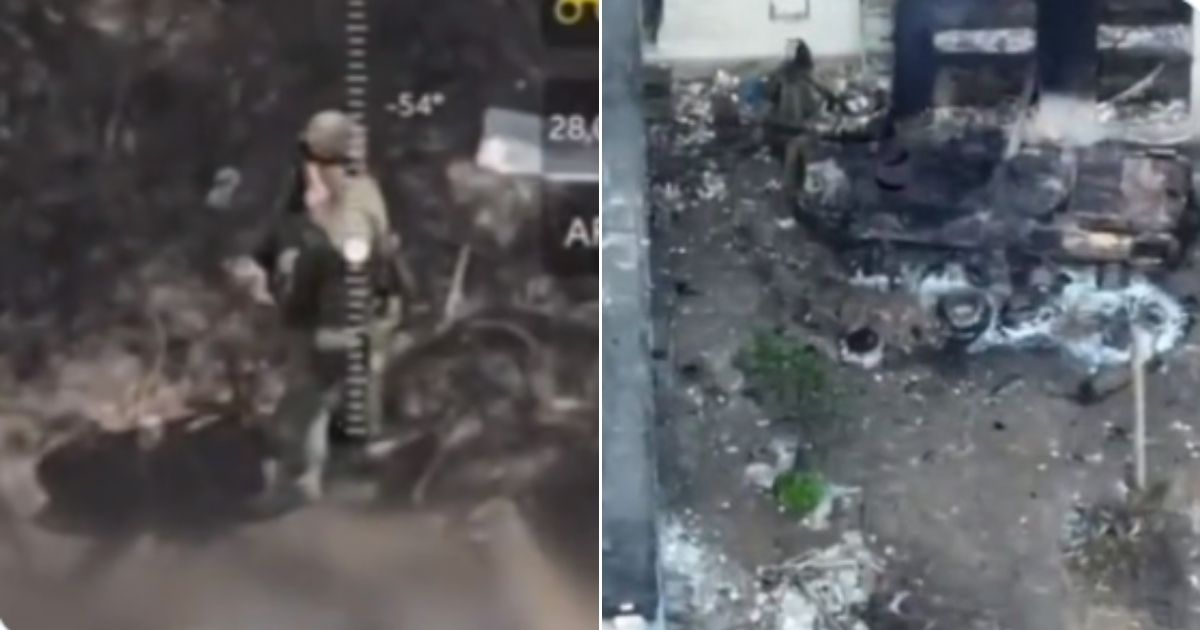 The following article, Watch: Russian Soldier Flips the Bird to Ukrainian Drone, Instantly Regrets It, was first published on Flag And Cross.

One Russian soldier got back more than he asked for after extending the middle finger to a Ukrainian military drone.

Footage of the altercation shows a group of Russian soldiers surrounding a BTR armored personnel carrier.

The Russian soldier can be seen extending the middle finger to the aircraft as it flies overhead, the first among his unit to recognize the drone.

A video of a Russian soldier running maintenance on a Russian BTR giving the finger to a Ukrainian drone, shortly before the BTR gets destroyed by a dropped mortar. https://t.co/KUlKdiTDoJ pic.twitter.com/GF0RPnOxbz

At a later point, a drone aircraft flies over the building the Russian soldiers were using. The aircraft drops a bomb on the vehicle.

It’s not clear if the drone that made the strike was the same one that merited the profane gesture from the enemy.

Anton Gerashchenko, an advisor to Ukraine’s Ministry of Internal Affairs, shared an edited video of the drone strike on his Twitter and Telegram accounts on Monday.

Follow-up footage shows that the building the Russian soldiers were using was heavily damaged, and the personnel carrier they surrounded was left in smithereens.

It’s not clear if the Russian armed forces took casualties from the strike. One man walks out of the building after the BTR is destroyed, suggesting the Russians were using the facility as a base of operations.

The footage was dubbed with music from Richard Wagner’s “Ride of the Valkyries” and a line from Liam Neeson’s character in the movie ‘Taken.”

The strike was captured in the Russian-occupied Zaporizhia region, according to a Gerashchenko’s tweet.

The special forces of the 15th Main Directorate of the Security Service of Ukraine were responsible for the strike, according to Gerashchenko.

Drones have proven highly effective weapons in the war between Russia and Ukraine.

So-called ‘loitering’ drones with the ability to wait in the sky for enemy forces have wreaked havoc on Russian tanks and vehicles.

Drones aren’t the only weapons in the conflict that military analysts are pointing to as game-changers in the future of warfare.

The federal government is preparing to supply the Ukrainian military with Multiple Rocket Launch Systems.

The U.S.-made launchers can hit the enemy with powerful rockets from a range far outstripping conventional artillery.