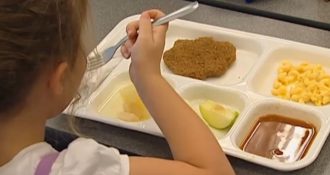 The following article, Biden to Take Away Kids Lunches Unless School Go All-In for Transgender Agenda, was first published on .

Joe Biden has decided that schools that don’t toe his radical transgender agenda will have their school lunch budgets cut.

You read that right. Joe Biden wants to starve kids if they don’t agree with his dangerous transgender policies.

President Joe Biden’s administration has moved forward with a new interpretation of Title IX anti-discrimination laws that could potentially strip federal funding for school lunches from schools that do not let transgender students use their preferred bathrooms or play on preferred sports teams.

What this means is that any recipients of the USDA’s Food and Nutrition Services child nutrition programs, including the National School Lunch Program, could lose federal funding if they do not comply with Biden’s new interpretation of Title IX.

“President Biden is holding lunch money for poor Americans hostage in pursuit of his radical agenda. He is insisting that we allow biological males to compete in girls’ sports or else lose funding for SNAP and school lunch programs,” Noem said. “South Dakota will continue to defend basic fairness so that our girls can compete and achieve. I would remind President Biden that we have defeated him in litigation before and are ready to do so again. Mr. President, we’ll see you in court.”

Joe Biden has threatened to take away children’s school lunch money to pursue his radical agenda.

He’s targeting states like ours that make it clear biological men do NOT belong in girls’ bathrooms and sports.

If you act on this, Joe, we’ll see you in court and we will win. pic.twitter.com/i8oU0aYTfL

Biden cares about his agenda, not America’s kids.