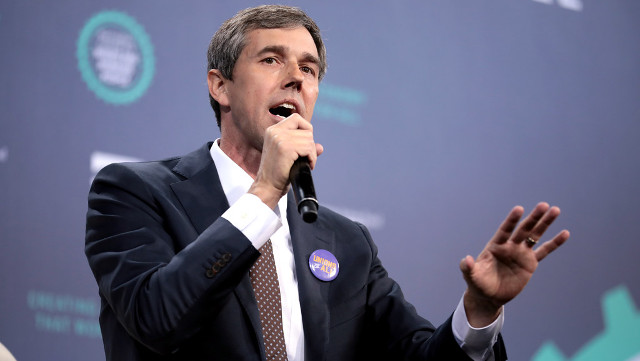 If Beto O’Rourke gets elected, Texans may have to hand over their guns.

“I don’t think the people who have them right now in civilian use should be able to keep them,” O’Rourke said.

O’Rourke said the policy “may not be politically popular” or “may be too honest.”

This is the second time O’Rourke has flip-flopped on gun confiscation, famously backing a proposal some identified as the most tyrannical gun control policy ever as a contender for the Democratic presidential nomination in 2020.

In a September 2019 Democratic debate, O’Rouke enthusiastically exclaimed that the federal government would confiscate AR-15s and AK-47s.

O’Rourke’s policy, extreme even among Democrats at the time, established him as a public enemy of American gun owners.

O’Rourke said that he’s “not interested in taking anything from anyone” in a February campaign event, even going so far as to say that he would “defend the Second Amendment” as governor.

However, O’Rourke changed his campaign platform on his website last week, according to Fox News.

The campaign edited out a reference that called for simply reducing the number of AR-15-style weapons in circulation, Fox reported. On the website under “gun safety,” O’Rourke states that “I don’t believe any civilian should own an AR-15 or AK-47.”

A platform of mandatory gun confiscation is a bold proposal in Texas, a conservative-leaning state where citizens overwhelmingly support the Second Amendment.

O’Rourke interrupted a press conference on the state’s response to the massacre at Robb Elementary School in Uvalde last week.

O’Rourke is a former congressman and a former member of the city council in El Paso. His gubernatorial campaign is his second attempt at statewide office in Texas, after losing a bid to unseat Republican Sen. Ted Cruz in 2018.

American civilian gun owners possess as many as 20 million AR-15-style rifles, according to the National Shooting Sports Foundation.

A Texas gun confiscation, or “mandatory buybacks” as O’Rourke has described his program during his 2019 presidential bid, would entail seizing millions of guns from residents of the state.

It would require extensive cooperation from law enforcement personnel in local and state agencies, many of whom might disagree with a policy of confiscating guns.