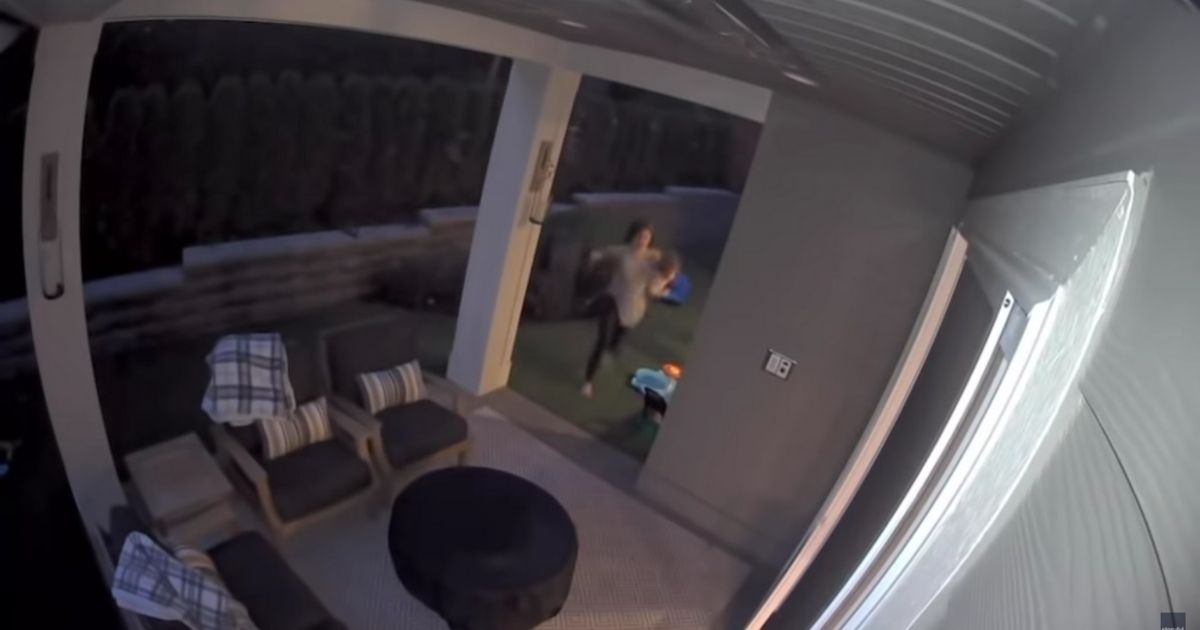 The following article, Video: Mother Snaps Into Action When She Sees Her Toddler Running Toward a Black Bear, was first published on Flag And Cross.

A Redmond, Washington, mother received the shock of her life when she saw her 2-year-old daughter sprinting toward a little bear in their backyard.

The quick-thinking mother hurriedly grabbed her daughter, lifted her, and then darted back into the house within seconds. The home’s security camera captured the ordeal.

“I just panicked. I didn’t really have a lot of thoughts in the moment so much as get the child and get back inside,” the mother, Samantha Martin, told WTVT-TV.

“I was scared and started cussing like a sailor,” Martin said, according to Storyful, which posted the video to YouTube:

Martin said that her toddler Juniper has a love for reading. Juniper had recently been learning about animals from an animal identification book.

Bears were her favorite animal, the mother told the news station.

CCTV footage showed a little bear running along the home’s concrete compound wall when the toddler runs out of the home, shouting, “That’s a bear!”

The mother and daughter duo had been watching a movie at home when the daughter spotted the furry animal, and quietly unlocked the door to the yard before running toward the animal.

“It was just a little baby bear, but my biggest concern wasn’t necessarily the baby bear so much as I didn’t know where the mom was and didn’t know how she’d feel about two humans running towards her baby,” Martin said.

“I think she was just excited to see something from her book,” Martin said.

According to the mother, the bird feeder the family had set up in their backyard attracted the omnivore to their home. The feeder is now destroyed.

“The bear had pulled it down or ripped it or loosened it,” Martin said.

“Bird feeders can provide a real attractant for bears and other wildlife … take down your bird feeders in the spring,” Washington Department of Fish and Wildlife Puget Sound Region Communications Manager Chase Gunnell told the outlet.

Martin told WTVT-TV that she spoke with Juniper about the dangers of wildlife following the close call.

“I did tell her the bear was dangerous and we’ve been watching National Geographic,” Martin said, adding that she was also considering buying a child locking device for the patio door and would not set up a feeder again.

“I love birds, but I also don’t want bears to continuously come into the yard, so I’m not putting the bird seed back up,” Martin said.

In recent months, officials have warned Redmond residents of significant bear presence in the area, with over three sightings the week of May 15, KING-TV reported.

On May 21, a Redmond resident David Shelden was surprised to see a black bear meandering 25 feet from his house while he was washing the dishes inside.

“He was inquisitive, which was really, really cool, and again when I yelled at him, he stopped, and I started talking to him, and he was listening and was watching, but he wasn’t getting tense … it’s a lot of fun,” Shelden said.

Continue reading: Video: Mother Snaps Into Action When She Sees Her Toddler Running Toward a Black Bear ...