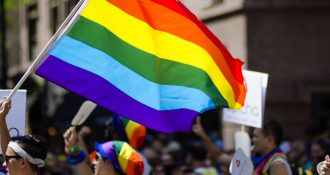 A new study finds that the number of people who claim to be gay, non-binary, or transgender has soared in the last decade just as leftists continue making LGBTQ issues a main part of their radical ideology.

In his study, Eric Kaufmann notes that The last decade has seen a precipitous rise in the share of Americans identifying as LGBT, particularly among the youngest adults. Today, among those under 30, a wide range of surveys converge on a number of around 20%.

Government data from Canada and the UK indicate that surveys might be overestimating the extent of the rise in LGBT identity. This caveat must be kept in mind in understanding this report. Nonetheless, these government sources indicate that the trend is real, even if less reliable surveys might exaggerate it. The UK’s Office for National Statistics finds that 7.6% of those 16-24 identify as LGBT, which can be taken as a low-end estimate for that country.

The most popular LGBT identity is bisexual, which is significantly more common among women than men.

In the end, the study finds that the rise in people identifying as LGBTQ corresponds to the rise in media and social pressures to push homosexuality and gender issues in the media and politics.

“Overall, the data suggest that while there has been an increase in same-sex behavior in recent years, sociopolitical factors likely explain most of the rise in LGBT identity.”

4/ We reached 'peak trans' in 2020. @TheFIREorg data on 57,000 undergraduates for 2020-21 shows that in 50 colleges sampled in both years, the non-binary share dropped from 1.5% to 0.85%, a statistically-significant decline, with younger less trans. UK & Canadian data show same pic.twitter.com/wmIIAv8wrZ

6/ Political aspect most important for white and college-educated. @TheFIREorg data shows that a very liberal white female student who supports the idea of shouting down a speaker to prevent them speaking has around a 7 in 10 chance of being LGBT pic.twitter.com/Q5ppla2SaE

8/ 52% of students taking highly political majors such as race or gender studies identify as LGBT, compared to 25% among students overall. Those in the social sciences and humanities are about 10 points more LGBT than those in STEM

10/ LGBT & the mental health crisis. Derek Thompson shows that 44 percent of US teens feel persistently sad or hopeless, 75 percent for LGBT teens. Besides the pandemic, why? https://t.co/rX3bQwlhUZ pic.twitter.com/vix6CpjjYX

12/ Assuming that becoming ‘very liberal’ involves both innate dispositions & exposure to messages, it's reasonable to assume that a culture which encourages boundary transgression & vulnerability could prompt people to ‘identify’ as sad or anxious, as with LGBT identity

14/ In the wake of Florida’s so-called “Don’t Say Gay” Bill, I find school type does not matter much for LGBT identification. Suggests “grooming” is not occurring, but it's legitimate to debate whether schools are accurately representing the mix of lifestyles in a population /end pic.twitter.com/CZWpsTHoMz

In other words, all this is pushed by the media and social pressure. It is all fake.

This really is no surprise.