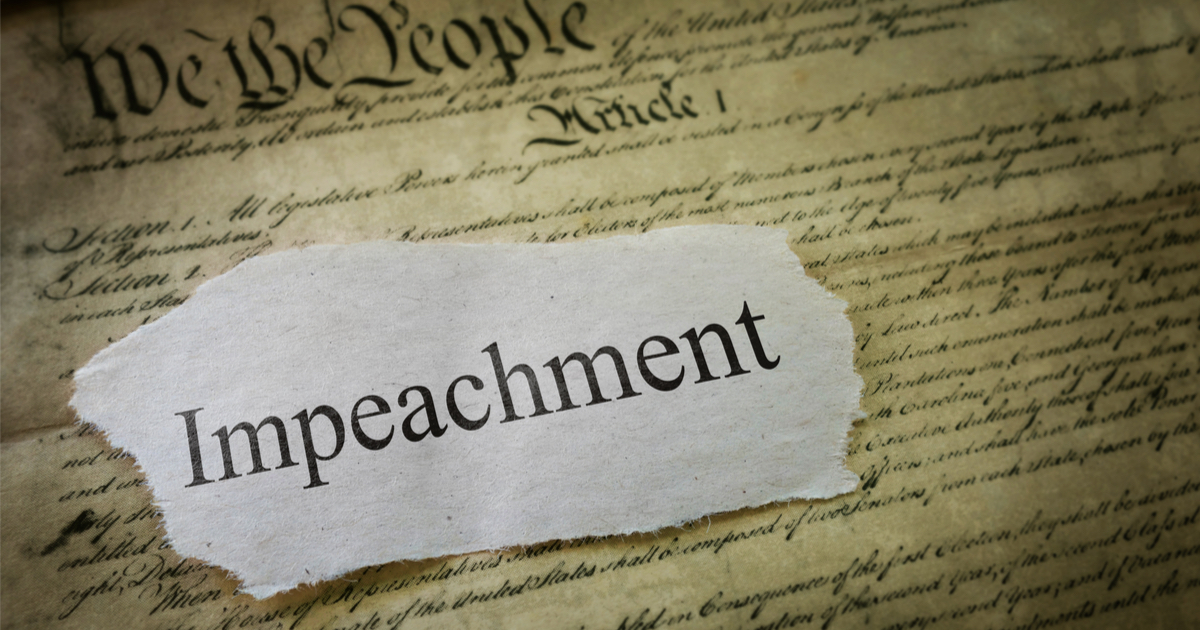 The following article, Op-Ed: Republicans Want to Impeach Biden, But Should We Take the High Road Instead?, was first published on Flag And Cross.

Recently, a poll conducted by the University of Massachusetts at Amherst found that over two-thirds of Republicans believe President Joe Biden should be impeached if Republicans take control of both houses of Congress in the coming midterm elections.

Rather than commenting on the poll, we should ask a basic question. Is impeachment a good idea?

We have to admit that after two impeachment proceedings against former President Donald Trump, the opportunity to pay the Democrats back is tempting. This is particularly the case considering Democrats impeached the president over allegations of Russian collusion, which the Democrats made up as a dirty campaign trick. It would seem only just to pay them back.

But do we really want to go down that road? By lowering the bar on impeachment, some contend, we could simply make it part of an ever-deteriorating electoral process — to wit, the sore losers trying to paralyze their political opposition. Do we want to normalize such behavior?

The Democrats setting a bad precedent is no reason for Republicans to follow that precedent.

It could be argued that the very stability of our governance is at stake and that other means can be found, particularly at the ballot box, to redress grievances. That, of course, assumes that elections are fair and honest. Since there is considerable evidence that they are flawed, it makes the cause of election integrity all the more urgent.

However, the bar for impeachment was not so much lowered in Trump’s case as it was exploited in a very destructive way. Democrats did not just have weak evidence of high crimes and misdemeanors — they manufactured the whole controversy and paid for it out of official Democratic campaign funds. They then colluded with the establishment media and launched a bogus proceeding. They may well have committed crimes in the process.

Maybe the Durham investigation will finally get to the bottom of the crimes far worse than Watergate and Hillary can try out a new orange jumpsuit. But it would seem that the wheels of justice not only grind slowly — they sometimes don’t grind at all.

The legal process will be hampered by jury shopping and other techniques. The Department of Justice will slow-walk the release of essential information. One of the great frustrations of our era is that guilty parties are rarely charged, and if they are, they are likely to get off.

It would be nice to have confidence that the law will be impartially and judiciously applied, but that confidence has been eroded. It is pretty clear that the FBI, the FISA courts, the Justice Department — in fact, the entire judicial mechanism at the federal level — have been compromised.

After eight years of Obama appointments, can we reasonably look to the DOJ to prosecute wrongdoers? The permanent bureaucracy protected by civil service rules runs the show, regardless of the possibility of an incoming Republican attorney general. With this set of factors, getting justice from the judicial system seems like a low-percentage bet.

If the system is so compromised, does that not make the case for impeachment? Impeachment is both a political and judicial process, and it is done outside of the compromised judicial structure of the executive branch. It would seem to be about the only alternative likely to achieve some modicum of justice.

Then there are the political optics of the thing.

Democratic policies are directly responsible for the war on energy, resulting in near-runaway inflation and a food and fuel crisis. No matter how friendly the establishment media, it can’t hide from Americans what is going on.

Democrats are riding low in the polls. Do we want to do anything to distract from self-destruction?

Republicans can look like the sensible party. Even if some voters have problems with us, we still look more reasonable than the Democrats. Would impeachment talk ruin that narrative? Would it make us look just as wacko as they are?

That said, Biden is really vulnerable for his failure to simply enforce the law fairly and without discrimination. We have immigration laws that are simply being ignored. Whether he favors the current laws or not, it is his constitutional duty to enforce them.

In short, impeachment is not the best way to correct problems, while decisive political victory is by far the best. But if justified, impeachment should not be ruled out.

If the poll is accurate, we better start thinking carefully about whether this is something we really want to do and whether the political optics can be managed, knowing full well the media will not be on our side.

We better think things through, or we could do more harm than good to our cause.

Clearly, the first order of business is to win big in November. If we don’t, the whole argument is moot.

Continue reading: Op-Ed: Republicans Want to Impeach Biden, But Should We Take the High Road Instead? ...