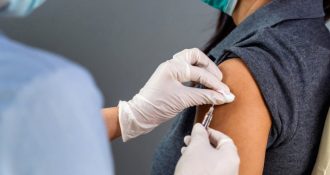 The following article, Michigan University Punishes Student for Telling Others She was Allowed a Vax Exemption, was first published on .

A Michigan university is being sued for punishing a student who told others that the school had afforded her a coronavirus vaccine exemption.

Oakland University, in Auburn Hills, Michigan, took action against student Inara Ramazanova, after she talked to other students about her vax status, according to Just the News.

The school labeled her actions as “collusion or conspiracy” to help others evade the school’s rules.

Ramazanova, a Russian immigrant, went through the school’s disciplinary proceedings last summer. But the school considered no evidence and went into its process with a preconceived notion that it unsurprisingly arrived at once it was all over.

According to the student’s legal counsel, First Liberty Institute, the school intended to prevent students from “providing false information to others for the sake of gaining a religious exemption.”

But First Liberty notes that the school’s proceedings were biased and a mockery of justice.

The school only interviewed one witness, the administrator of a Facebook group, who said Ramazanova’s post about her vax status responded to “general questions” in the forum “regarding religious accommodation requests,” not specific to OU, according to the legal letter. Three days later, the panel confirmed the “collusion or conspiracy” charge.

The school then kicked Ramazanova out of her housing and was told she was no longer able to attend class in person.

Ramazanova was able to graduate, but the disciplinary record will stay intact unless a court orders the school to dump it.

The student’s counsel says that the university violated both her constitutional rights and also the Fair Housing Act, First Liberty Deputy General Counsel Justin Butterfield said. “They owe her an apology and a clean academic record,” he said, to atone for OU’s “punitive and vindictive” actions, which will damage her “future pursuits.”

First Liberty is demanding that the college expunge Ramazanova’s “conspiracy or collusion” record, issue her a written apology, and publicly assure students that they “may exercise their constitutional right to freedom of speech without being subjected to the same retaliatory and discriminatory treatment.”

Continue reading Michigan University Punishes Student for Telling Others She was Allowed a Vax Exemption ...