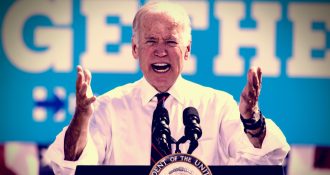 The following article, Biden at 490 Days: Falls to Most Disliked President in Modern History, was first published on .

The president who Democrats got more votes than any in history now has the lowest approval rating of any modern president at this stage of his presidency (including Trump).

Biden’s latest approval numbers have now gone past the president that the Democrats say (and still say) is the “most hated president in history.”

The numbers come for the left-wing FiveThrtyEight blog, which notes that no president going back to Harry Truman has ever measured as low as the 40.9 percent Biden hit on day 490 of his presidency.

Former Presidents Donald Trump, Bill Clinton, and Gerald Ford had lower average approval ratings at some stage early in their presidencies, but Biden has caught up, and today’s average was the first for which he was below all presidents since Truman, a potentially troubling trend as Democrats ready for the midterm elections.

Biden's net approval is 4 points lower than Trump's at this time in office pic.twitter.com/CurB7eAKpC

FiveThirtyEight is not the only polling to find Biden slipping lower every day. A recet Reuters Ipsos poll found Biden at a low 36 percent last week.

Only 10% of Republicans and 28% of independents approve of President Biden, while 72% of Democrats still do. However, among Democrats Biden has seen a 10 point drop from two weeks ago when 82% approved of him, a driving factor for his lower overall approval rating,” the Ipsos analysis said.

BREAKING: Approval rating for Joe Biden falls to 36%, the lowest level of his presidency, according to a Reuters/Ipsos opinion poll completed today.

According to FiveThirtyEight, the presidents since Truman rate:

Continue reading Biden at 490 Days: Falls to Most Disliked President in Modern History ...