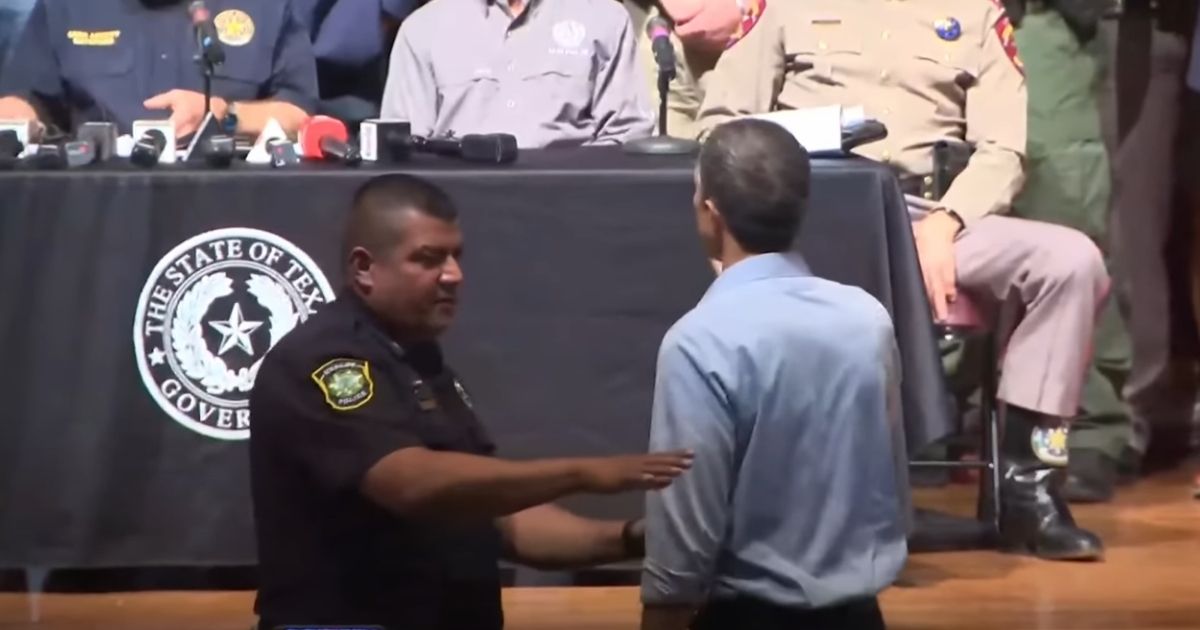 The following article, Video: Beto Escorted Out by Police After Meltdown During Gov. Abbott’s News Conference on Shooting, was first published on Flag And Cross.

Remember back in 2018 when Rep. Beto O’Rourke, billed as “the next Obama,” took the Democratic Party by storm? Rumors of a 2020 presidential run swirled as he gave Republican Sen. Ted Cruz a run for his money in the Texas Senate race.

After losing narrowly to Cruz, he focused on his run for the 2020 Democratic presidential nomination. Gracing the cover of the April 2019 issue of Vanity Fair, O’Rourke declared, “Man, I’m just born to be in it.”

His White House bid fizzled in November 2019, with The Texas Tribune saying O’Rourke “never lived up to the high hopes, and after the initial fanfare of his entrance, he sunk into the low single digits in polls and saw his fundraising come back down to Earth.”

But that hasn’t stopped him from jumping into the Texas gubernatorial race. He won the Democratic primary in March and will face off against the Lone Star state’s current governor, Greg Abbott, in November.

Abbott held a news conference on Wednesday at Uvalde High School about the previous day’s horrific mass shooting at Robb Elementary School in Uvalde that left 19 children, two teachers and the gunman dead.

According to The Texas Tribune, O’Rourke disrupted Abbott’s remarks and shouted, “This is on you.”

The outlet reported that the Democrat, seated in the third row, “walked to the stage” and told the governor, “You are doing nothing. You are offering up nothing. You said this was not predictable. This was totally predictable when you choose not to do anything.”

Next to Abbott onstage were Republican officials including Cruz, Lt. Gov. Dan Patrick and Uvalde Mayor Don McLaughlin, all of whom had harsh words for O’Rourke.

Cruz snapped, “Sit down and don’t play this stunt.”

Patrick told O’Rourke he was “out of line and an embarrassment.”

“Sir, you are out of line,” McLaughlin said. “I can’t believe that you’re a sick son of a b**** that would come to a deal like this to make a political issue.”

As O’Rourke was being escorted out of the auditorium by officers, he turned to Abbott and shouted, “This is on you until you choose to do something different. This will continue to happen. Somebody needs to stand up for the children of this state or they will be continue to be killed just like they were killed in Uvalde yesterday.”

He did have some supporters in the crowd. One woman was heard saying: “Let Beto speak, he has a lot to say!”

Another supporter told the Tribune, “I’m sick of this. Guns are the main weapon of choice. Why can’t we have more gun control? It’s too much. We can’t keep doing this.”

But many of those on stage and in the crowd reacted with anger and outrage to his interruption. One woman could be heard shouting, “Get out!”

“So his presence wasn’t really noticed in the 15 or 20 minutes that people were gathering inside because he was not in the room. So this seems something very clearly staged by Beto O’Rourke and his campaign wanting to confront the governor at this moment.”

.@JanetShamlian reports on Beto O’Rourke confronting Gov. Abbott during presser: “There were two people across the aisle from me and a moment before the press conference started, they got up from their seats when Beto walked in … This seems something very clearly staged.” pic.twitter.com/eaAxrZP6Gt

According to the RealClearPolitics average of polls in the Texas gubernatorial race, Abbott leads O’Rourke by a margin of 6.7 percent, 47 percent to 40.3 percent.

Hopefully, after Beto’s 2018 defeat in the Senate race and his failed bid for the 2020 Democratic presidential nomination, a loss in November will mark the end of his political aspirations.

The former congressman is best remembered for his impassioned response to a question about the mandatory buyback of so-called assault weapons he had proposed during a September 2019 Democratic primary debate. The previous month, a shooter had killed 23 people at a Walmart in El Paso, Texas.

To much applause, a very animated O’Rourke asserted, “Hell yes, we are going to take your AR-15, your AK-47. We’re not going to allow it to be used against our fellow Americans anymore.”

Two months later, he was out of the race.