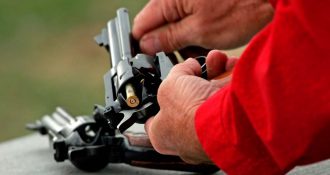 The following article, Leftist School Board Member Stirs Hate with Lie that Texas Shooter was ‘White Nationalist’, was first published on .

The shooter at Robb Elementary in Uvalde, Texas, was a Hispanic youth named Salvador Ramos. But to sow hatred, a leftist school board member in Virginia quickly rushed to social media to claim Salvador was a “white supremacist.”

On Wednesday, Nicole Cole, a member of the Spotsylvania, Virginia, school board quickly jumped to her Facebook page to claim that the Texas shooter is a white supremacist racist.

Most American’s hearts are pained today because of the continued terrorist murders of people and children of color at the hands of white nationalists. When I hear this comment, “they [Congress, Senate, GOP local] aren’t going to do anything until it happens to their family/them”, I cringe. Because it doesn’t happen to them, they know it – THEY are the ones allowing for it to happen to other Americans.

Cole continued, insisting that the GOP “not only authorize and support guns in hands of anyone,” but they also “support radical domestic terrorist organizations and ideology to GROOM these shooters.”

All the trauma and terrorism inflicted on our communities is trying to silence the public – but we have to do the OPPOSITE, communities, citizens, PARENTS, students, have to be VOCAL – and we have to VOTE them out – we have to support every effort to get them out of office from local to state to federal,” she wrote. “We have to select elected officials based on what truly impacts our children and communities – their support of public schools, their willingness to pass GUN LAWS and ownership restrictions, their willingness to support VOTING and Democracy.

Spotsylvania School Board member makes a statement on shooting in Texas.

“Most American's hearts are pained today because of the continued terrorist murders of people and children of color at the hands of white nationalists.” pic.twitter.com/DbknhZcSeP

Obviously, this woman is a liar. We know that this young killer is not a white supremacist. We don’t yet have any real idea why he did what he did, but he didn’t do it because he is a white racist.

But this is how Democrats work. NO crisis is left unexploited for their agenda.