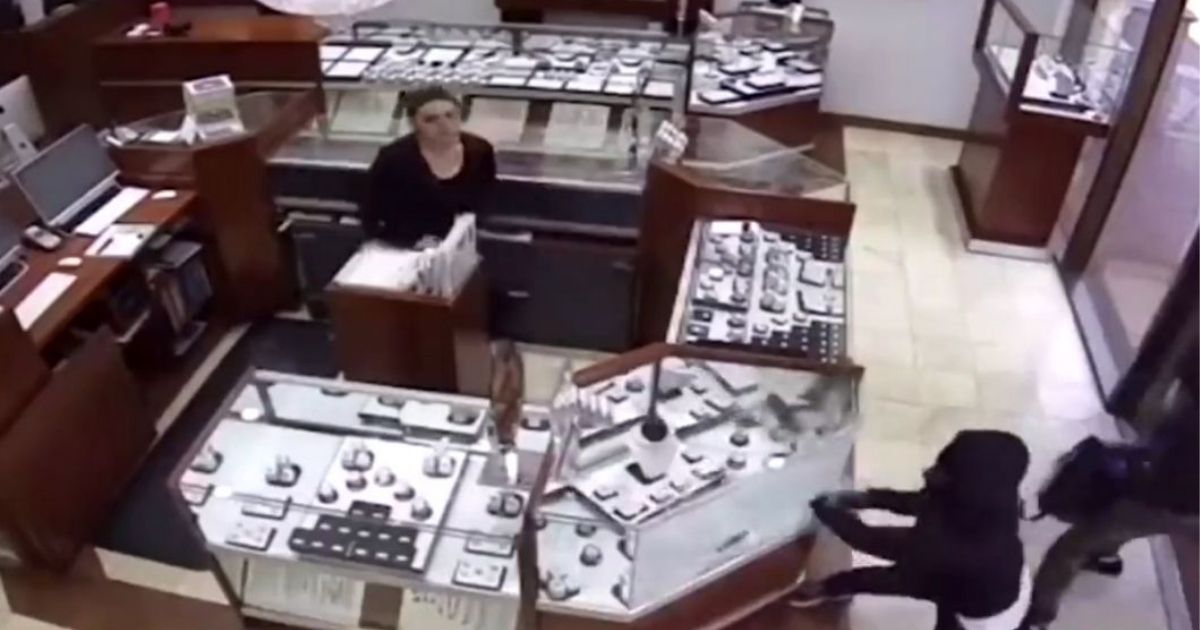 The following article, Video: Fierce Family Throws Robber Into Window as Their Mom and Pop Store Comes Under Attack in California, was first published on Flag And Cross.

Workers at the Princess Bride Diamonds jewelry store in Southern California’s Orange County bravely fought off four thieves who attempted a smash-and-grab robbery at the family-owned showroom over the weekend.

The four hammer-wielding thieves — their faces concealed by black hoodies — burst into the store and smashed a glass case, trying to grab the jewelry on display.

According to CCTV footage of the incident circulating on social media, the store employees, including the owners’ children, Sarah Baca and Dallas Baca, immediately sprang into action, beating back the intruders, punching and kicking them.

Family & staff of the Asian-owned Princess Bride Diamonds jewelry store at the Bella Terra Mall in Huntington Beach, Calif. successfully fought off a group of black robbers who were armed with hammers. pic.twitter.com/uveVRpkUq4

Sarah Baca grabbed a chair and swung it against one of the four men, the video showed. The melee continued until the robbers gave up and fled out the door, the footage showed.

No major injuries occurred during the incident, according to a statement from the Huntington Beach police, KCRA-TV reported.

Four thieves managed to run away with $7,000 worth of stolen merchandise from Don Roberto’s in hand.

According to the newspaper, at least two other Orange County jewelry stores were robbed in smash-and-grabs last month.

As with the attempted Princess Bride robbery, those thieves used hammers to smash display cases at two Kay Jewelers showrooms, one at Westminister Mall and one at Brea Mall on April 4 and April 15.

In each of those incidents, the thieves got away with stealing around $200,000 worth of goods, according to The Orange County Register

Sarah and Dallas, the children of Princess Bride’s store owners, appeared on a Tuesday episode of “Fox and Friends.”

“I think this is like our livelihood, and… we want California to be great again,” Sarah told co-host Fox News’ Todd Piro. “And this is like our home. We want to defend it. I’ve grown up here my whole entire life.”

“It’s sad… what the state has come to, but I think with… good people all banding together that… all have the same values, we can turn it around I’m hoping,” Sarah said.

“We definitely had been worried since the riots when those started and the lootings happened in L.A., and it’s just been continuing to migrate down to Orange County,” Sarah continued. “And we know that it’s been happening a lot in our area, and it’s just crazy when it actually happens to you.”

“But we just really hope that police are able to be funded more so that way they can stop this kind of thing from happening and that criminals are actually prosecuted, so they don’t feel so brazen to do this in broad daylight,” she said.

“I’d rather get the snot kicked out of me at least trying my best than to just sit in the back and cower if people walk in,” Sarah’s brother Dallas said. “But we’re definitely taking this as a little bit of a wake-up call, just going to up our security and everything in the store.”

Continue reading: Video: Fierce Family Throws Robber Into Window as Their Mom and Pop Store Comes Under Attack in California ...