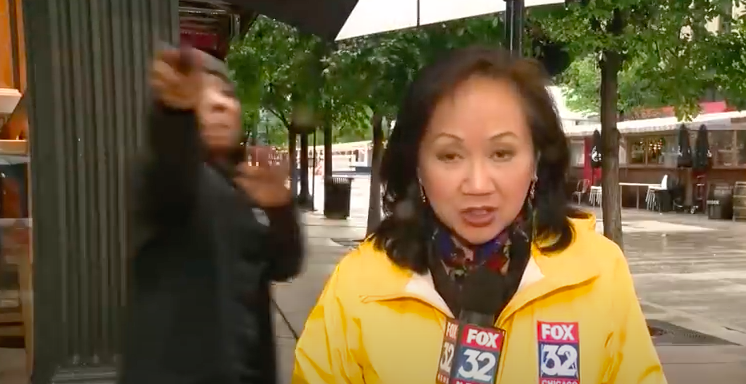 Thanks to decades of uniquely lopsided gun restrictions, the city of Chicago, Illinois is in the grips of a gang violence epidemic.  The sheer number of shootings and homicides in the city is staggering, and the brazen bad guys have even gone so far as to start shooting up each others’ funerals.

It’s an ugly scene all around, and it’s only getting wilder.

Chicago police are asking for the community’s help in finding a man that is believed to have pointed a gun at a FOX 32 news crew during a live segment in the city’s River North neighborhood.

The Fox 32 crew was doing a live segment on gun violence Wednesday when a man walked behind reporter Joanie Lum and pointed what appeared to be a pistol at the camera as he passed by. He remained in view of the camera as he continued down the street, still appearing to be holding the firearm.

Police were asking for some help in identifying the suspect.

Police are calling the man a “person of interest” in the incident and have asked the community to help identify who and where he is. Anyone with information is asked to call the Chicago police at 312-744-8261.

The terrifying moment can be seen below: