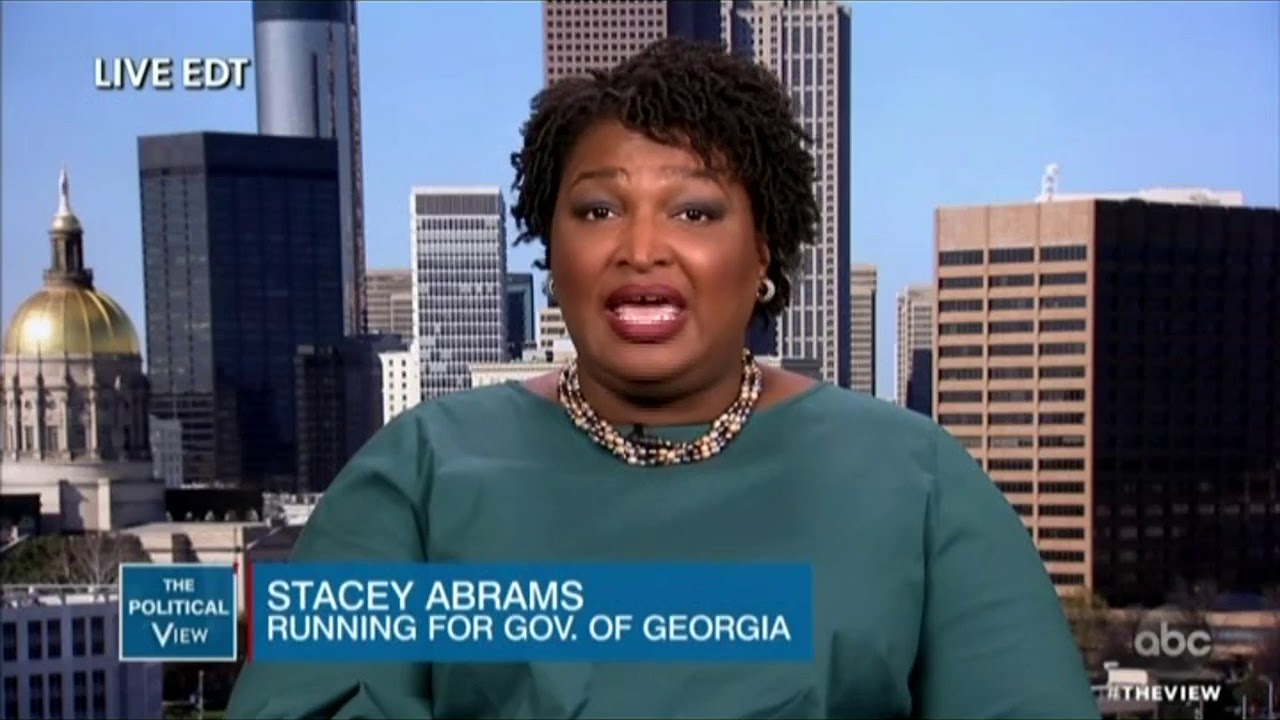 The following article, Stacey Abrams Tells Georgians She’s Running to Be Governor of ‘Worst State in the Country’, was first published on Flag And Cross.

We’re pretty used to Democrats telling us — as New York’s Andrew Cuomo did back when he was better known for being a governor than a creepy old man who killed thousands of nursing home patients with a stroke of a pen — that America “was never that great.”

They might not use precisely those words, but the message is clear: Don’t talk about making America great again, because it never even was.

It takes a special kind of talent, however, to extrapolate this thinking to an individual state — particularly when one is running for governor of said state.

Our hats are off, then, to Stacey Abrams, the woman who calls Georgia the “worst state in the country to live in” but is still running to be governor of it in 2022 (and doesn’t quite believe she lost the state’s last gubernatorial election, either).

(Not that this is the only reason Abrams shouldn’t be governor; here at The Western Journal, we’ll keep you up-to-date on news and analysis regarding the 2022 Georgia governor’s race and all of the midterm elections — all from a Christian, conservative perspective you won’t see in the mainstream media. If you support our coverage, please consider subscribing.)

According to the Gwinnett Daily Post, Abrams made the remarks Saturday night as she addressed Gwinnett County Democrats at their Bluetopia Gala in Norcross, Georgia.

She immediately conceded that her opponent — likely to be current Georgia GOP Gov. Brian Kemp — could use the statement against her, but she said she was reacting to Georgia Republicans using the state’s attractiveness to businesses as a barometer of success.

Abrams also said Georgia may be the No. 1 state to do business, but is also “the worst state to live” in, before talking about quality of life issues

“When you’re No. 48 for mental health, when we’re No. 1 for maternal mortality, when you have an incarceration rate that is on the rise and wages are on the decline, then you are not the No. 1 place to live,” she said.

Instead, Abrams suggested, Kemp cared only about businesses, not working families — rhetoric I’m certain you’ve never, ever, not even once heard come out of the mouth of a Democrat when discussing a Republican opponent.

“Brian Kemp doesn’t care about our families or else he would be doing more to make sure that they were taken care of,” Abrams said.

Curt Yeomans, senior reporter with the Gwinnett Daily Post, noted that “although Kemp did beat her statewide, Abrams won Gwinnett County by several points in 2018, and Biden/Harris, Ossoff and Warnock won the county in the 2020 election cycle so Democrats are feeling comfortable in Gwinnett.” He was referring to President Joe Biden and Vice President Kamala Harris along with Georgia Democratic Sens. Jon Ossoff and Raphael Warnock.

Reminder: that although Kemp did beat her statewide, Abrams won Gwinnett County by several points in 2018, and Biden/Harris, Ossoff and Warnock won the county in the 2020 election cycle so Democrats are feeling comfortable in Gwinnett.

Democrats should probably feel less comfortable about the fact her comments are available on social media in Georgia’s 158 other counties — as well as the 3,140 remaining counties or equivalent entities in the United States.

Why, they’re even available to her likely November opponent.

“Stacey Abrams may think differently, but I believe Georgia is the best state to live, work, and raise a family,” tweeted Kemp, who leads in the polls going into this Tuesday’s primaries. “And Marty, the girls, and I will work hard every day from now until November to keep it that way for four more years!”

Stacey Abrams may think differently, but I believe Georgia is the best state to live, work, and raise a family.

And Marty, the girls, and I will work hard every day from now until November to keep it that way for four more years! https://t.co/T77LF1DroP

A little more than an hour after Yeomans initially tweeted about her remarks from the gala dinner, Abrams’ official account seemed to try to get ahead of the damage by spinning the remark.

While omitting the damaging comments about Georgia being the “worst state in the country to live,” the tweet simply highlighted the negative statistics she’d cherry-picked during her speech.

GA may be #1 place for biz, but we’re #48 in mental health, #2 in uninsured. #1 in maternal mortality & new HIV cases, #9 in gun violence. For too many, Kemp’s Georgia doesn’t include them. Why? Because #KempDoesntCare

As Governor, I’ll lead #OneGeorgia that’s #1 for all of us.

The damage was done, however.

“Our state is the worst! Vote for me!”

Quite a sales pitch from @staceyabrams https://t.co/u3kRgBJNqN

However, one Twitter user noted it might not put a dent in her biggest supporters, who tend to be Abrams-worshippers outside the state:

Stacey Abrams knowing her comments about Georgia being the “worst state in the country to live” will make her campaign millions of dollars from California and New York. pic.twitter.com/lGK0hagqyZ

According to an Atlanta Journal-Constitution report in February, 80 percent of Abrams’ donations had come from outside of Georgia, while Kemp said 84 percent of his donations were from inside the state.

Perhaps, then, this won’t hurt her fundraising base. Every liberal loves to hear a little bit of South-bashing in general and Georgia-bashing in particular, what with that “Jim Crow” election integrity law that stopped so many people from voting that … Georgia is seeing a record number of early voters for its primaries, including from minorities.

However, Georgia-bashing rhetoric doesn’t work well when the people you need to vote for you are all in Georgia.

During her cameo on “Star Trek,” Stacey Abrams might have been the ruler of a united Earth (or whatever), but in real life she has to win a statewide election in what she just called the “worst state in the country to live in.”

Democrats might not even pretend to love America anymore, but one would have thought they would have retained the good sense not to extrapolate this to the state level. Guess not.

She may well be correct. If Georgia really is the most corrupt state in the nation, there is a good chance it will elect one of the worst Governors in the nation. We will soon know.