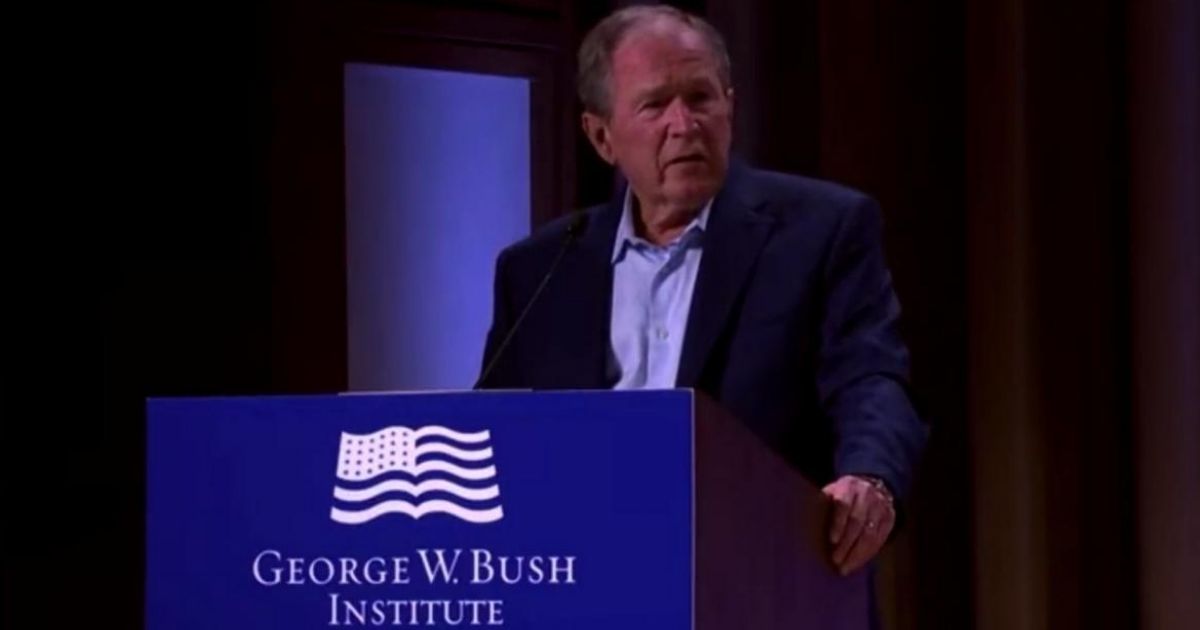 Former President George W. Bush made an accidental admission about the biggest decision of his presidency.

Speaking in a Wednesday event at the Bush Center in Texas, the 43rd President was condemning Vladimir Putin’s invasion of Ukraine.

“The decision of one man … to launch a wholly unjustified and brutal invasion of Iraq…” said Bush.

“I mean Ukraine,” he added, quickly correcting himself.

Speaking in Dallas this afternoon, former President George. W Bush made a significant verbal slip-up while discussing the war in Ukraine.

He tried referencing what he described as the “wholly unjustified and brutal invasion” — but said Iraq, instead of Ukraine. pic.twitter.com/tw0VNJzKmE

Bush appeared flustered as he quickly corrected himself, perhaps realizing that the gaffe was no minor bump in the road of his speech.

Perhaps this was more than a Joe Biden-style verbal gaffe.

Like the Iraq War, Putin’s war of aggression against Ukraine has descended into a disaster.

The Bush administration claimed that the invasion of Iraq was necessary because of supposed weapons of mass destruction being created by Saddam Hussein’s regime.

No nuclear weapons were ever found in Iraq after the 2003 invasion. The foreign-policy blunder destabilized the Middle East, setting the stage for an upsurge in Islamic extremism and the eventual rise of ISIS.

Similarly, Putin’s Russia has falsely claimed that Ukraine is controlled by Nazis. In reality, the country has a president with Jewish heritage.

A study on the Iraq War by the Army concluded that the invasion only served to embolden Iran, according to the Army Times.

Bush’s Vice President, Dick Cheney, claimed that the Iraqi public would greet US troops as “liberators” before the invasion. This proved false.

Vladimir Putin expected Ukraine’s government to collapse within days of the invasion, but his army’s disastrous attempt to capture the capital of Kyiv ended in a total defeat for Russia.

There were 4,418 American service members killed in Iraq. Casualty estimates for Russia’s paper-tiger military in Ukraine are believed to be far higher, with some figures pinning combat deaths in the tens of thousands.

Conservatives turned on the Bush legacy in great part because of the aftermath of the Iraq War. Former President Donald Trump likened the Iraq War to one of the worst foreign policy errors in American history as a candidate in 2016.

Perhaps there are more similarities between Bush and Vladimir Putin than previously believed.