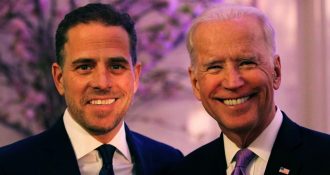 The following article, We Know for Sure: The Media, the Democrats, and Joe Biden LIED About EVERYTHING Concerning Hunter, was first published on .

We Know for Sure: The Media, the Democrats, and Joe Biden LIED About EVERYTHING Concerning Hunter

From 2020 all the way to this very month, the left-wing media has been insisting that Biden did not lie about his son, Hunter’s, crooked business deals. Now we know for a fact that they all lied.

The media, their “fact-checkers,” the Democrats, and the entire Biden family. They all lied.

During the 2020 election cycle, Joe Biden repeatedly said that he had no knowledge about his son Hunter’s business deals and also denied that Hunter made money from China. But finally, after two years of refusing to report the facts, the media is beginning to roll out evidence that Joe Biden lied.

For example, during the presidential debate broadcast on October 22, 2020, moderator Kristen Welker asked Biden about his son’s business deals in China and Ukraine. Biden quite directly refuted any claims that Hunter made money from deals in China.

In fact, Biden struck back and said the only person who had made money from China was Trump.

Here’s Joe Biden in 2020 saying his deadbeat son Hunter “has not made money” from China.

Hunter made $5.8 million from 2013 to 2018 from Chinese business interests, according to NBC News. pic.twitter.com/I6cQSTv5Pr

Just after his father took office, Hunter himself added that he is “absolutely certain” he will be exonerated during any investigation.

“I’m cooperating completely. And I am absolutely certain, 100% certain, that at the end of the investigation that I will be cleared of any wrongdoing,” he said in April of 2021 after the Department of Justice announced it was investigating his taxes, The Hill reported at the time.

With this in mind, it is important to note that both Joe Biden and his son Hunter are on record forcefully denying that Hunter made any money in China and that there are no improprieties in Hunter’s tax filings.

In fact, Hunter’s own lawyer, Walter Shaub, is also on record blowing off any connections between Hunter’s shady business deals and his now president father, Joe.

“Hunter Biden seems a lot like somebody whose primary profession is being Joe Biden’s son. But unless there’s a direct connection to Joe Biden, that’s really more of a criticism of one private citizen rather than a government official or an administration,” Shaub said, according to ABC News.

But facts are emerging that paint a very different picture. For instance, on his taxes, Hunter has yet to explain why high-powered Hollywood lawyer Kevin Morris handed over an incredible gift of two million dollars to pay off one of Hunter’s back tax bills.

This incredible boon was reported only weeks ago by the New York Post, and even the Post could not discover why Morris was so generous.

Now, the left-wing media is finally reporting on the information contained on the laptop that Hunter Biden accidentally abandoned in a Delaware computer repair shop. And ABC News just published a story revealing that emails on that laptop show that Hunter’s firm took in $11 million between 2013 and 2018 and that a portion of those earning came from deals made with China.

But ABC also noted that Hunter’s $11 million was spent awfully quickly. The news outlet noted that Hunter spent $200,000 per month on luxury goods between late 2017 and early 2018 for about 5 months.

The news outlet also pointed out that one of Hunter’s own business partner advised Hunter to revise his tax returns upward by $400,000.

As to China, ABC added that China was a big part of Hunter’s income.

“Biden made $5.8 million, more than half his total earnings from 2013 to 2018, from two deals with Chinese business interests,” ABC reported.

“Biden’s most lucrative business relationship was acting as a consultant in a project with a company that belongs to a once-powerful Chinese businessman who is now thought to be detained in his homeland,” the news outlet explained.

This proves conclusively that Joe Biden flat out lied during the 2020 election cycle.

As to the president’s claims that he never had any knowledge about Hunter’s business deals. That, too, is an outrageous lie.

According to the New York Post, there are at least a dozen examples of Hunter business deals in which Joe was a direct participant.

So far, the media has not made a big deal about all this. One would think it would be big news. A president who ran on a lie, his son who made and allegedly hid millions in income from one of our biggest enemies, and decades of corruption from some of our top officials. But it is all of little interest to the media.

Now, imagine if the Biden family’s last name was Trump.

Dan Bongino also has a great post on this.

Continue reading We Know for Sure: The Media, the Democrats, and Joe Biden LIED About EVERYTHING Concerning Hunter ...