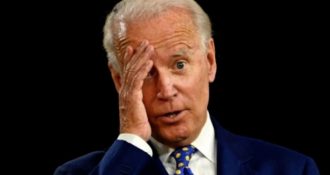 The following article, Joe Biden Loses 30% of Support Among Hispanics In Just One Year, was first published on .

Causing serious alarm bells in the Democrat Party, new polls find that Joe Biden has lost 30 percent of his support among Hispanics in just a year.

This time last year, Biden sat at 55 percent support over all among Hispanics, but now, according to the Daily Mail, he has fallen to a low 26 percent.

The poll that the Mail is citing is no right-wing polling firm, either. It is the Quinnipiac University firm.

The president was elected with a 59 percent majority of the Hispanic vote, with Donald Trump winning 38 percent.

In the first spring of his presidency, 55 percent of Hispanics said they approved of him, according to a May 2021 poll by Quinnipiac University.

But a new poll out this week shows that the support has fallen to just 26 percent.

Among all voters, Biden’s approval is currently at 41.1 percent, according to FiveThirtyEight’s poll aggregator.

Of the post-war presidents, only Gerald Ford was worse, at 39 percent approval.

Barack Obama was significantly higher, at just below 58 percent; George W. Bush was at an astonishing 72 percent.

This should scare the bejebus out of the Democrat Party. The Dems assume that they have a lock on minorities, and they base their entire strategy on maintaining that support.

This polling, though, shows that the Democrats can lose that support.

Continue reading Joe Biden Loses 30% of Support Among Hispanics In Just One Year ...