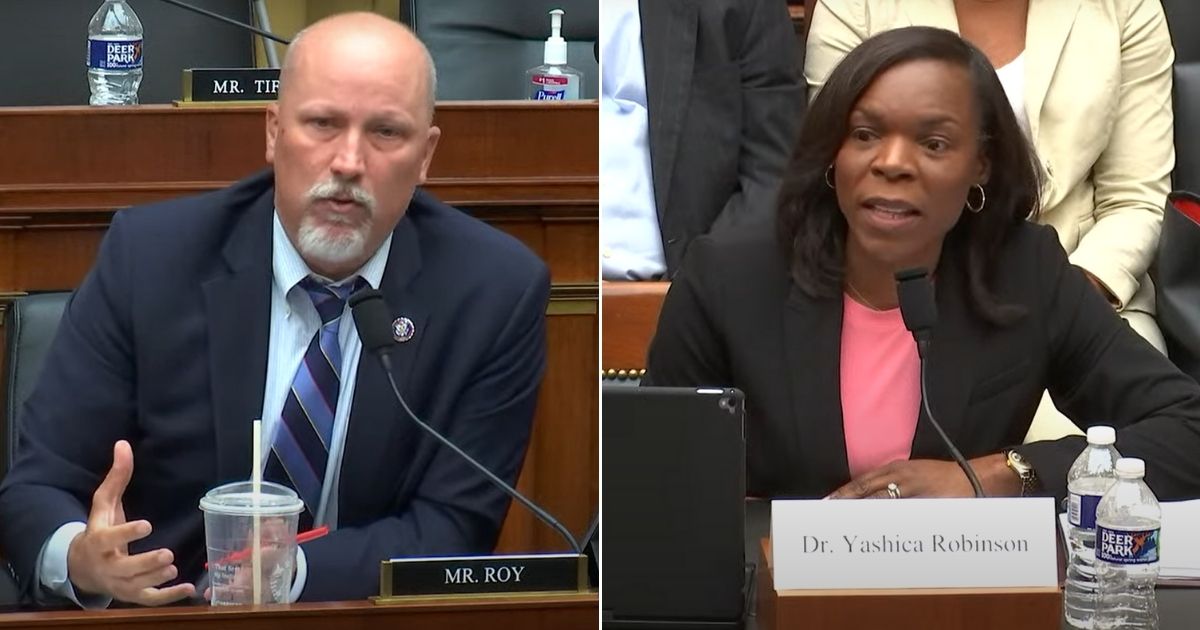 The following article, Texas Rep Goes Off After Abortion Doctor Dances Around the Murderous Procedure, was first published on Flag And Cross.

When is a Republican using “inflammatory language” to describe abortion? When he or she describes what the procedure can entail, apparently.

In a viral exchange between an Alabama abortion provider and GOP Rep. Chip Roy of Texas during a House Judiciary Committee hearing Wednesday, the doctor protested Roy’s phrasing of questions — despite the fact he was describing what can happen as an unborn life is terminated, merely denuded of leftist euphemism.

(As the Supreme Court gets closer to ruling on a case that could overturn Roe v. Wade, The Western Journal will continue to bring you the latest developments on what this means for the unborn — all from a conservative, Christian perspective you won’t find in the mainstream media. If you support our news and analysis, please consider subscribing.)

Roy began by asking Dr. Yashica Robinson how late in a pregnancy she had “performed an abortion in terms of weeks of the unborn child.”

“Yes, my name is Dr. Robinson and I provide abortion care in Alabama,” Robinson began. “So Alabama has restrictions –”

“What is the answer to the question, the latest that you have performed an abortion?” the congressman said.

“So unfortunately my state is one of those states that has passed restrictions or bans on abortion care, which limits physicians like myself,” she continued.

“In other words, you’d like to do it later,” Roy interrupted, asking his question again: “What is the latest you have performed an abortion?”

“Well, since I will always follow the law and I live in the state of Alabama, I provide abortion care up until 20 weeks gestational age,” Robinson replied.

Roy then went on to note that at that stage of fetal development, a normal abortion would involve the dilation and extraction procedure.

“Have you performed abortions at that stage, and in doing so, have you had baby parts that you’ve had to discard or store in some capacity?” he asked. “Legs? Arms?”

It was at this point Robinson pushed back on the characterization. “One of the things that you all have done throughout this hearing is just use inflammatory language as you talk about the care that we provide,” she said.

“No, it’s a question,” Roy responded.

“It’s a simple question,” he said. “Have you had human parts, baby parts, arms, legs, as a result of an abortion performed, at the time you just acknowledged you perform abortions, up to 20 weeks?”

Again, though, Robinson wanted to make this a battle of the words we use to talk about killing the unborn — and the pride she feels in doing so.

“I am a physician and a proud abortion provider,” Robinson said. “There’s nothing that you can say that makes it difficult for me to talk about the care that I provide to my patients.”

“Have there been baby parts, yes or no?” Roy shot back. “And where and how have they been stored?”

Robinson, however, continued to refuse to provide an answer, saying she wanted to talk instead about the “care” she provided to women.

The congressman responded by referencing a 2015 undercover video at a Planned Parenthood clinic in Texas where, according to the Daily Caller, an executive for the abortion mega-provider admitted harvesting and selling fetal tissue to cover expenses.

“So the answer to the question is fairly obvious,” Roy said.

“You don’t want to talk about the reality of what actually happens.”

“All of those things that you just mentioned, I have never seen that in a health care setting, ever. We don’t put baby parts in freezers or Pyrex dishes,” Robinson responded.

“Well then where do they go?” Roy said just as his time expired.

As the Supreme Court prepares its ruling on an abortion case that could end up overturning Roe v. Wade — and with it, the invented constitutional right to an abortion — pitched battles over language like this are more than just viral entertainment for the politically inclined.

The left has made it clear for some time it intends to normalize abortion by turning it into “health care” and using other euphemisms around the procedure.

One of the recommendations: Don’t use “choice.” pic.twitter.com/nqVA8W1nWT

Ironic that the House Pro Choice Caucus is insisting on calling it a “decision,” not a “choice.” Shouldn’t that warrant renaming the group the “House Pro Decision Caucus?”

However, if states are able to enact stricter regulations around abortion, this is where the battle will be fought by Democrats and pro-abortion groups: redefining the language. If abortion is “health care,” then it stands to reason protecting the unborn is simply “criminalizing health care.” Why make abortion “safe, legal and rare” when the left doesn’t want it to be rare?

Roy, meanwhile, described what often happens in this line of “health care” — just without using the terms the left prefers. Robinson called this “inflammatory language,” all because he talked about abortion in a way that wasn’t sterilized and happy.

Rep. Chip Roy showed conservatives the easiest way to defeat the left: by being blunt about what killing the unborn entails if the other side wants to dance around the murderous procedure.