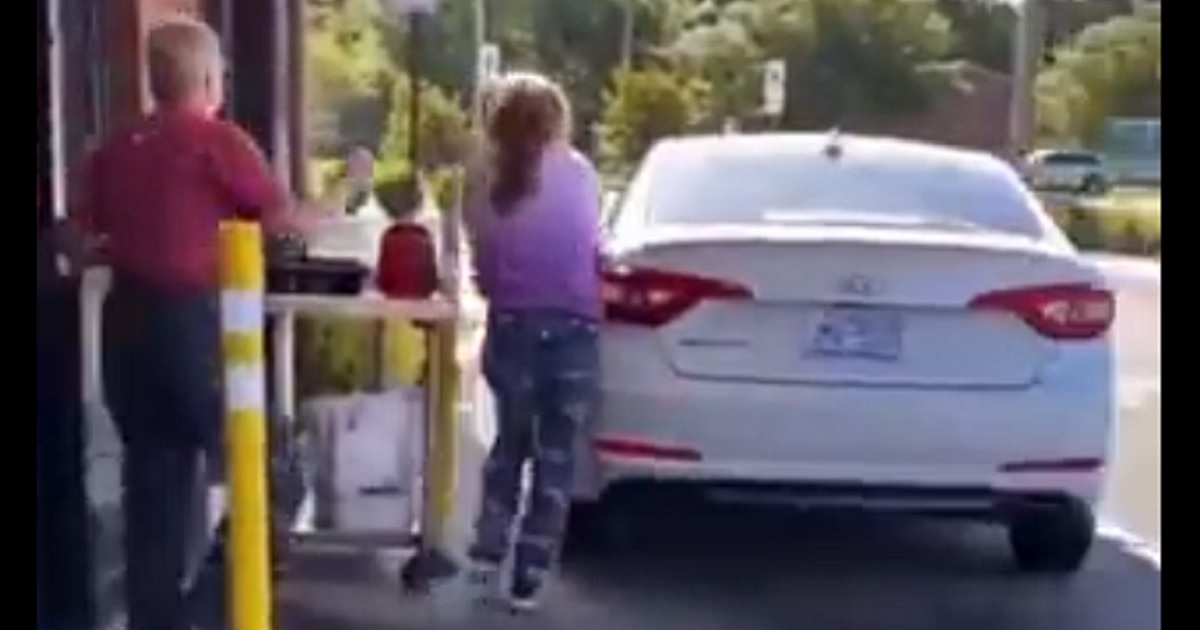 The following article, Watch: Woman’s Car Ends up Totaled After Taking Off on Its Own at Chick-fil-A Drive-Thru Window, was first published on Flag And Cross.

The world may never know why the chicken crossed the road.

But there is a reason the car crossed the chicken restaurant parking lot: The motorist got out of the car without shifting into park. The vehicle left the lot, plowed through some landscaping, and wound up dropping out of sight in a ditch.

When jumping out of your car to pitch a fit at the drive-through window, while harassing an underpaid employee, be sure to put your car in park. pic.twitter.com/XaRCUHWXWG

According to WECT-TV in Wilmington, North Carolina, the North Carolina Highway Patrol reported responding to the scene at about 9:30 a.m. May 9 at a Chick-fil-A in an unincorporated area near Wilmington known as Monkey Junction.

While many on social media claimed the woman had gotten out of the vehicle to fight with the restaurant workers, and that the employees thought the woman might be impaired, WECT reported that she was actually getting condiments from a tray.

Regardless, get out she did, and that’s when the trouble really started. As the vehicle started rolling away, one of the workers can be heard warning the woman, “Get your car.”

The woman started chasing after the vehicle

Another employee shouted after her, “This is why we’re concerned, ma’am.”

Although the view is blocked in the video, the woman was apparently able to get into the car, but was unable to stop it before it went off of a retaining wall. Another restaurant worker is seen running toward the crash.

This was a dangerous situation that could have ended tragically. Fortunately, even though the car was totaled, according to the woman’s family, the driver was unhurt.

TikTok user southernspice82, who captured the original clip, posted a follow-up video that showed the car in the ditch. This video included a claim the incident started when a Chick-Fil-A employee was concerned because the woman seemed to be “nodding out” behind the wheel.

WECT reported that family members who contacted the station said the woman had been charged with driving while impaired. The woman was cited for failing a field sobriety test, WECT reported.

Family members said the woman has struggled with addiction but has been clean for months, according to WECT. They said no alcohol had been found in her blood, the station reported.

The incident put Chick-fil-A back in the news, but the restaurant chain is no stranger to publicity — a lot of it the kind no business wants.

While the chain is known for the quality of both its food and its employees — who have a reputation for being unfailingly polite, Chick-Fil-A has often been the target of protests that had nothing to do with food or service.

Recently in Santa Barbara, California, the city council tried to have a Chick-fil-A drive through declared a public nuisance. A line of waiting customers tied up traffic on city streets.

Other liberal local officials have tried to keep the chain from opening franchises when they could.

The attacks continue, even as Chick-fil-A pursues environmentally friendly policies progressives should applaud.

Yet through all of that, the company remains consistently among the nation’s most popular eatery chains.

The viral video only shows the end of an interaction where the restaurant’s employees, true to form, were trying to help.

For Chick-fil-A, it sometimes seems, there really is no such thing as bad publicity.

Continue reading: Watch: Woman’s Car Ends up Totaled After Taking Off on Its Own at Chick-fil-A Drive-Thru Window ...