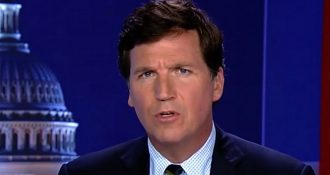 The following article, More of the Media’s Lies that Tucker Carlson is to Blame for Buffalo Shooter’s Crimes, was first published on .

The left-wing meme du jour is the claim that “racist” Fox News Host Tucker Carlson is the chief purveyor of “Great Replacement Theory,” but the truth is, the concept was originally pushed 75 years ago by a Democrat Senator from Mississippi.

The subject of “Great Replacement Theory” is once again in the news as the left-wing press moves to blame Fox News in general and host Tucker Carlson in particular for somehow influencing suspected Buffalo supermarket shooter Payton Gendron to go on his racist shooting spree.

A quick look through Twitter shows one blue-checked leftist after another outright claiming that Carlson is a racist who endorses the theory that maintains that minorities are purposefully being imported into the U.S. to dilute the white population.

There are literally thousands of examples of leftist Tweeters linking Carlson and Fox to this alleged shooter, but here are a few examples:

The "Great Replacement Theory" is the language of death, wielded by opportunistic right-wing figures from Fox News’ Tucker Carlson to Rep. Elise Stefanik, the No. 3 House Republican. Not everyone hears it. My column encourages people to listen:https://t.co/mRFlUdSqTA

It "might as well have been a quote from Tucker Carlson during one of his many rants about white Americans being diluted, weakened, and replaced by people of color. Just pause for a second and reflect on that."@WajahatAli writes.https://t.co/Ux2uG9cbP4

There's a straight line from Tucker Carlson, Donald Trump and the GOP's embrace of the racist "Great Replacement Theory" to the Buffalo White supremacist TERRORIST attack. New issue of my newsletter: https://t.co/HG7iTyUXtF pic.twitter.com/HYSXwrHZE4

A self-described white supremecist traveled to a black neighborhood and murdered 10 people today, leaving behind a manifesto on the Great Replacement theory — a racist conspiracy theory endorsed repeatedly by Tucker Carlson, the nation’s most-watched political pundit

Just a reminder that Tucker won’t bow to shame or outrage over having helped incite a mass shooting by mainstreaming the Great Replacement Theory because the violence wasn’t an accident, it’s quite literally the point.

The gunman who killed at least 10 people in Buffalo is a self-described white supremacist who advocates for the Great Replacement Theory.
He left a manifesto. See if you can tell the difference between it and standard fare on the Tucker Carlson show. https://t.co/ScoxO1NG5E pic.twitter.com/T5mZw9iV9C

Indeed, one of the main videos the left is pushing to “prove” that Tucker Carlson is an abject racist is a clip from April of 2021 where Carlson specifically mentions the term “Great Replacement.”

But as you watch, you’ll note that Carlson couches the discussion purely as one about political power, not “race.” Tucker never one says “white people are being replaced.” He says that the Democrats are “importing” a new electorate who are “more obedient voters from the third world.” And they are more obedient because they are getting free stuff from big government!

Still, even as today’s leftists are attempting to make Tucker Carlson the progenitor of “Great Replacement Theory,” the main contention undergirding the theory is already 75 years old.

The basic idea of “replacement” came from the poison pen of Theodore G. Bilbo, a white, Democrat who was a two-time governor, and a thrice elected U.S. Senator from Mississippi, the Washington Post reported.

For his part, Bilbo proffered his replacement theory strictly on racial grounds claiming that “they” — whomever “they” were” — intended to allow Negros to mingle with whites until the white race was blotted out.

This raging racist Democrat went on to claim that whites will be extinct in “300 years,” but so will blacks because everyone’s race will be diluted. Bilbo proclaimed that “the present rate of interbreeding and miscegenation and intermarriage between the [Black people] and the Whites, that in nine generations, which is only 300 years, there’ll be no Whites, there’ll be no Blacks in this country.”

When Bilbo went to run for re-election to a third term in the U.S. Senate, Republicans rose to blast him. Republicans including conservative leader Sen. Robert Taft of Ohio called Bilbo “a disgrace to the Senate,” and a large number of religious groups, academics, and military veterans joined the GOP to denounce Bilbo.

Fortunately for the vast number of opponents outside his voting district, Bilbo was not able to take his seat because, even though he won his election, he passed away from cancer in August of 1947 without ever serving a day of his third term.

Regardless, any dispassionate review of Tucker Carlson’s discussions of “replacement” juxtaposed with the original, racist version of the theory, clearly shows a marked difference. Unlike the view of Sen. Bilbo and that of the Buffalo shooting suspect, Tucker’s position is based solely on political power and voting rights. It has nothing to do with race.

Tucker has never once said that he does not want Hispanics to become Americans. He has also never signed on to efforts to block black people from voting. What he wants is legal immigration. Not floods of often unskilled and ill-educated illegals who will rise to support the Democrat Party because they are promised welfare, free schooling, food stamps, and free housing, all at the expense of the American taxpayers.

Continue reading More of the Media’s Lies that Tucker Carlson is to Blame for Buffalo Shooter’s Crimes ...