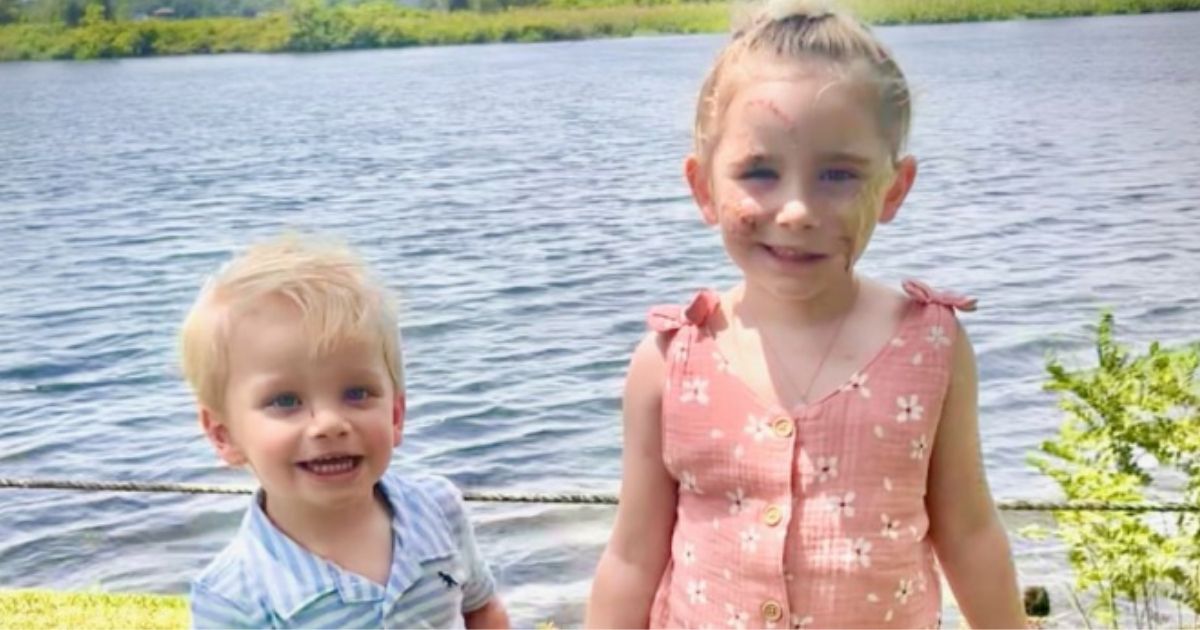 The following article, Mom and Young Kids Help Elderly Neighbor with Dementia Get Home, But Then Her Dog Attacks Them, was first published on Flag And Cross.

When one woman and her kids spotted an elderly neighbor with dementia wandering down the street, they did the right thing: They kindly escorted her back home.

And they almost paid for that act of kindness with their lives.

Bethany Hastings was with her two kids — 4-year-old Lainey Bayles and 2-year-old Wesley Bayles — at their rural home in Bonneau, South Carolina, on the evening of April 26.

They had just had dinner and were getting ready to spend a little time outdoors when they spotted an elderly neighbor in their driveway.

Hastings, her two kids and the neighbor got into Hasting’s golf cart, and Hastings drove the woman back to her house. When they arrived, the house door was wide open — and the woman’s pit bull was loose.

Mom and kids, 2 and 4, attacked by dog while helping elderly neighborhttps://t.co/rrZYzfWjUB

The mother told “Today” that they had met the dog before and had had no issues, but this time, something was different.

The dog approached them, sized them up and immediately lunged for the toddler.

“At that time, my son was sitting next to me in between me and this lady, and my daughter was on the backseat,” Hastings said. “He kind of looked at me, and then my son, and then he lunged at my son twice, and I got between them. Then my daughter screamed, and he went around to her and pulled her down to the ground.”

“And then first he got my brother, and then second he got me, and then third he got my mom,” Lainey said, according to WYFF.

Hastings lost no time pinning the dog, but then she had to wait for at least ten excruciating minutes before someone passed and was able to assist them. The whole time they waited, the dog continued to act aggressively and lunge at her, leaving her no choice but to hold on for dear life.

Finally, someone else stepped in.

“He took the children into his truck and then about five minutes later, another neighbor showed up and took the dog from me,” Hastings said, “Today” reported. “At that point, all of EMS and Animal Control and them showed up.”

While Hastings and Wesley needed some treatment for their minor injuries, they’re doing well. Lainey had to spend several days in the hospital, and her face is covered in lacerations.

“She’s feeling well,” Hastings said of Lainey. “Every day she gets a little bit more facial control on her left side … They were worried about nerve damage on the left side. That is still something that we’re going to have to over the next year keep an eye on and keep track of that may require difference procedures and possible muscle grafts to get her to be able to smile and have control of her face on her left side.”

While Lainey is healing and cautiously learning to enjoy the outdoors again, Hastings is still flummoxed over the unexpected nature of the attack.

“I didn’t even know what was happening, and I looked at my son, and I’m like, ‘Did you just bite my kid?’ And that’s when he lunged a second time,” she said.

“There’s no telling what provoked him. I literally still have no idea. I’ve thought about it a million times, and I can’t think of anything that we did that would have caused him to react.

“I wish that I had looked up and noticed her doorway open sooner, but even then the dog was not tethered, so he would have come out to the road. There wasn’t much that I could do on that end.”

The dog was euthanized.

Continue reading: Mom and Young Kids Help Elderly Neighbor with Dementia Get Home, But Then Her Dog Attacks Them ...