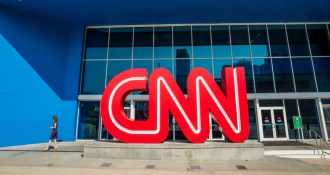 The following article, Want to Laugh Even MORE at the Losers at CNN? Here You Go…, was first published on .

If you want to laugh even harder at the feckless losers at CNN, here is a hilarious chance to do just that.

You’ll recall that CNN launched its subscription “news” service, CNN+, at the beginning of last month, and then were forced to shut it down in less than 4 weeks because no one wanted to pay to subscribe to it.

While that alone is hilarious enough, the poor schlubs who thought they had a dream gig at CNN+ got one final kick in the face this last week, and you’ll simply fall over laughing.

A week after the workers were fired by the streaming service’s parent company, Warner Bros. Discovery, the laid-off employees were sent welcome baskets from CNN+, according to the Wall Street Journal.

Inside the welcome baskets were items such as CNN-branded pens, food containers, popcorn machines, and headphones.

Adding insult to injury for the laid-off workers of the service that couldn’t survive a full month, there was a welcome note that read: “This is an incredible time to be part of CNN. Build relationships and take time to connect with colleagues and learn so that you make the most of your time here.”

CNN told the WSJ that the ill-timed welcome baskets were sent by “mistake.”

I’ll bet the run of CNN+ welcome baskets cost more than the money they made on subscribers, too! Ha, ha.

As a reminder of how absurd CNN+ was, the Blaze recapped:

CNN+ – the cable news network’s streaming service that charged viewers $6 per month – launched on March 29 and was shuttered on April 28. Despite CNN spending an estimated $300 million to launch the train wreck of a product, plus another $100 to $200 million to promote the doomed venture, CNN+ reportedly only garnered a pathetic 5,000 to 10,000 viewers a day.

“CNN Plus hired about 700 people for its launch,” the Washington Post reported last month. “A person at the network said that 350 people will be affected by layoffs, though the company expects many of those employees to find new roles at the company, absorbed back into CNN or into open jobs at Discovery-owned networks such as the HBO Max streaming service.”

What a hilarious comedy of errors.

And no outlet deserves the ignominy more.

Continue reading Want to Laugh Even MORE at the Losers at CNN? Here You Go… ...