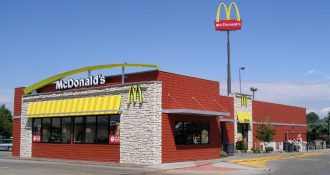 The following article, McDonald’s Announces Permanent Shutdown All Outlets in Russia, was first published on .

McDonald’s will sell no more Big Macs in Russia as the chain has now announced that it is pulling out of Russia permanently.

Only days after the Russian Bear invaded neighboring Ukraine, the fast food chain shut down its 800 Russian outlets. But now the company says that after 30 years of doing business with Russia, it will not reopen its restaurants no matter what Russia does.

Following a temporary shut down of more than 800 restaurants in the wake of the Russian invasion of Ukraine, McDonald’s has announced it will leave Russia altogether following a three-decade run in the country.

The fast-food burger chain will sell its Russian business – citing the war in Ukraine and the subsequent “unpredictable operating environment” as reasons that led the company to “conclude that continued ownership of the business in Russia is no longer tenable, nor is it consistent with McDonald’s values.”

Once the sale of the company’s Russian businesses is finalized, the chain restaurants in Russia will be “de-Arched,” meaning the locations will no longer be permitted to use the McDonald’s name, logo, or menu. The company says its employees will continue to be paid until the transaction closes and that they will have “future employment with any potential buyer.”

McDonald’s CEO Chris Kempczinski says he remains proud of the more than 60,000 workers employed by the company in Russia and that the decision to sell the business was a difficult one.

Ronald McDonald may have red hair, but it appears he doesn’t have a red heart!