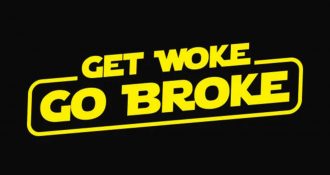 You may have noticed that many of America’s biggest corporations have been fairly quiet on the abortion argument all of a sudden, in another example of wokeness finally taking a back seat in American culture.

Think about it. The leak of the Supreme Court’s draft ruling that would overturn Roe v. Wade is over a week old, yet many of America’s biggest corporations have not gone all in with the left’s hand wringing and mental distress over abortion.

Remember how leftist corporate America went all in to support the extremist cause over the attack on Florida’s Parental Rights in Education law? Corporate America was lining up to destroy Florida over a law that merely stopped radical leftists from exposing kids under ten to the hardcore, gay agenda, and stopped the left from grooming little kids for sexual activity with leftist pedophiles.

But this time, these companies have remained mum over the Supreme Court’s draft decision.

“There is no upside in speaking out alone on this. So that is why they need to work collectively,” said Jeffrey Sonnenfeld, professor and senior associate dean of the Yale School of Management. “Nobody wants to have 40% of the country mad at them.”

Sonnenfeld said trade groups, which historically have been the most powerful and safe way for companies to step out, have become “overly cautious” and “neutered” by professional staffs who pingpong between lobbying jobs and don’t want to make waves.

“They would rather write mealy-mouthed, inconsequential, tedious working papers that don’t lead to any clear directives, so that the more you read, the less you know,” Sonnenfeld said.

Other companies are taking a “wait and see” approach to the draft decision issue.

So far, Disney, Walmart, American Airlines, Microsoft, and J.P. Morgan, Home Depot, and other big names are just not chiming in on the issue.

Maybe they are finally starting to understand that their place is not to advocate for left-wing political issues?

Perhaps they are finally just at the beginning of simply shutting up and selling us stuff like they are supposed to?