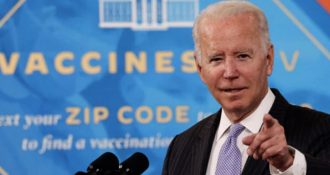 The following article, Biden’s White House Blasted for Lie that No COVID Vaccine Existed when He Took Office, was first published on .

Joe Biden is taking heat for a major lie about vaccines after tweeting that they did not exist when he took office even though they were available only a month after he was elected and more than a month before he took office.

Biden’s White House posted the tweet on May 12 saying there was “no vaccine available” when he took office.

“When President Biden took office, millions were unemployed and there was no vaccine available,” the White House tweeted. “In the last 15 months, the economy has created 8.3M jobs and the unemployment rate stands at 3.6% — the fastest decline in unemployment to start a President’s term ever recorded.”

When President Biden took office, millions were unemployed and there was no vaccine available.

In the last 15 months, the economy has created 8.3M jobs and the unemployment rate stands at 3.6% — the fastest decline in unemployment to start a President's term ever recorded.

But critics quickly pointed out that Biden himself made a big show about taking his first dose of the coronavirus on December 21, 2020, a full month before he was inaugurated.

Today, I received the COVID-19 vaccine.

To the scientists and researchers who worked tirelessly to make this possible — thank you. We owe you an awful lot.

And to the American people — know there is nothing to worry about. When the vaccine is available, I urge you to take it. pic.twitter.com/QBtB620i2V

The lie was so egregious, that even the left-wing press couldn’t let that one go unaddressed.

Kessler added, “Biden himself has said 8% of seniors had gotten the vaccine on the day he took office. Biden was one of them.”

Pluribus editor Jeryl Bier also blasted the White House for the lie. “’No vaccine available’?,” he said, adding, “What was president-elect Biden injected with? Sugar water? And was his *second* shot! Maybe check your own tweets?”

It’s just not true that “there was no vaccine available” at the time Biden took office. About 3.5 million people were fully vaccinated against Covid-19 and about 19 million people had received at least one vaccine dose as of Biden’s inauguration day on January 20, 2021, according to statistics published by the US Centers for Disease Control and Prevention. The US was already administering an average of more than 1 million doses a day at the time. The first doses administered outside trials were given on December 14, 2020, while President Donald Trump was still in office. And Biden himself received his second dose nine days before he was sworn in.

Of course, these claims tweeted by the White House is an outright lie.

But the White House can’t even delete it. It would be against the law! LOL. Biden’s lie is now a permanent government record.