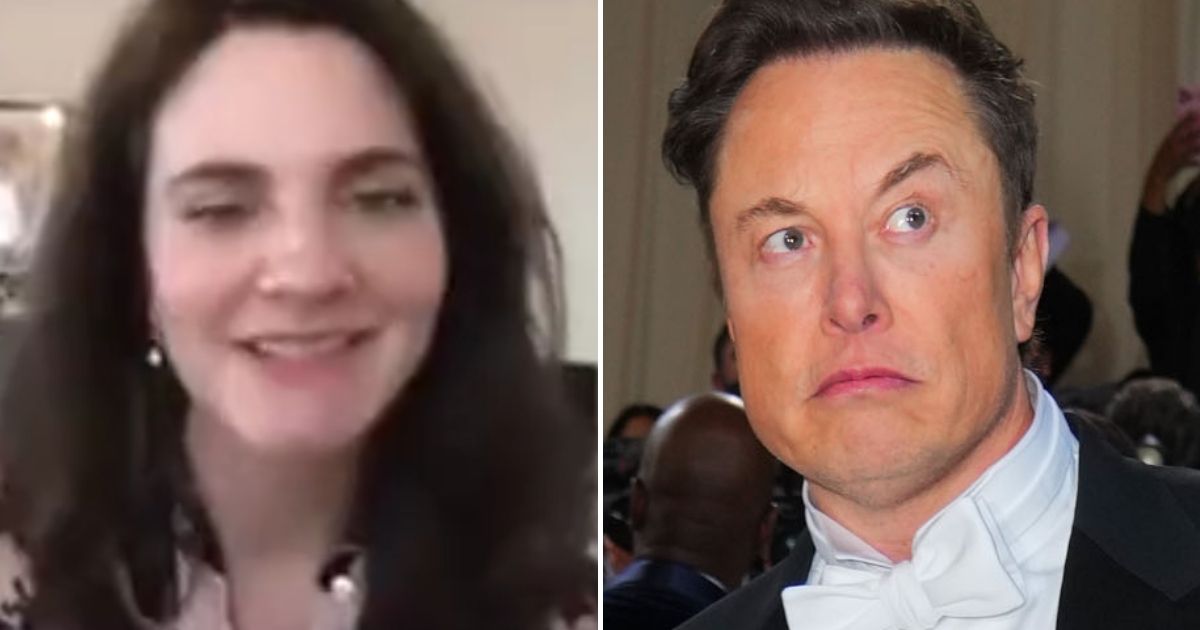 The following article, Elon Musk Has 1-Word Response to Biden’s ‘Minister of Truth’s’ Horrifying Plan for Twitter, was first published on Flag And Cross.

Though Republicans are trying to dismantle Biden’s “Disinformation Governance Board,” the head of the board, Nina Jankowicz, seems to have her own ideas about reining in free speech and Twitter, specifically.

Most recently, the Post Millenial tweeted a video of a Zoom meeting in which Jankowicz aired some ideas about handling Twitter.

But Elon Musk, who is in the midst of buying Twitter, had a word to say about her plan.

In a recording of the Zoom meeting (presumably separate from the Disinformation Governance Board), Jankowicz suggested that tweets containing perceived factual errors should be edited by others such as herself, the Post Millennial tweeted.

Biden’s “Ministry of Truth” director says she wants “verified people” like her to be able to edit people’s tweets so they can “add context to certain tweets” pic.twitter.com/KgMxUn3Hs6

Jankowicz’s plan is that “verified” Twitter users should be able to edit other users’ tweets if they believe they are misleading.

She went on to say that she is “verified” by Twitter. But “there are a lot of people who shouldn’t be verified, who aren’t legit” because “they’re not trustworthy.”

“Verified people can essentially start to ‘edit’ Twitter [in] the same sort of way that Wikipedia is so they can add context to certain tweets,” Jankowicz said.

She then offered this hypothetical situation to prove and justify her point:

“If President [Donald] Trump were still on Twitter and tweeted a claim about voter fraud, someone could add context from one of the 60 lawsuits that went through the court or something that an election official said…so that people have a fuller picture rather than just an individual claim on a tweet,” she said.

To this, Musk responded with just one word.

Musk’s tweet should not be brushed aside, since his deal to acquire Twitter appears to be going through.

Though Musk has announced that he has plans down the road to make Twitter public again, once he acquires the social media platform, it is expected that he will take it private, The Wall Street Journal reported.

Upon his initial offer, Musk made it clear that in order for Twitter to be successful, it has to be privatized first.

“However, since making my investment I now realize the company will neither thrive nor serve this societal imperative in its current form. Twitter needs to be transformed as a private company,” Musk’s SEC filing for the deal stated.

Jankowicz can dream about all the changes she wants to make to social media and free speech, but once Twitter is in Musk’s hands and private, she will have a hard time making those dreams come true.

But aside from the technicalities that will likely prohibit Jankowicz from making any serious changes to Twitter, the fact that this idea has been floated so openly by the woman who is now director of Biden’s Disinformation Governance Board — commonly referred to by conservatives as the ‘Ministry of Truth — should have everyone concerned.

While Jankowicz may not be able to touch Twitter in a few months, she can still tamper with all other social media platforms.

What’s concerning is that she didn’t even take the pains to try to veil this plan of hers. She was quite blatantly clear in advocating for direct tampering with free speech.

Sure, it’s important to have the right information out there. No one likes when lies are circulated. But that is part and parcel of the risks of free speech and the fundamental principles of our society.

A large part of our society rests on the marketplace of ideas. The marketplace of ideas is the theory that all ideas can compete in free, transparent and public discourse. The conclusion of that will be that the truth emerges from the competition of ideas, because ideologies and lies will always be culled based on their superiority, or inferiority.

Jankowicz has suggested that we regulate that marketplace. But that doesn’t work, because it breaks the whole system by introducing an unnatural suppression of ideas.

Make no mistake: This is an ill-intentioned power tactic from someone who now holds a position with potentially immense power in the Biden administration.

Luckily, there is a hope that with Musk’s ownership of Twitter, there will be some sort of cultural fighting back against this kind of free-speech suppression and power grab.

Musk’s privatized Twitter is, of course, not the answer or long-term solution, but it’s a bit of a start.