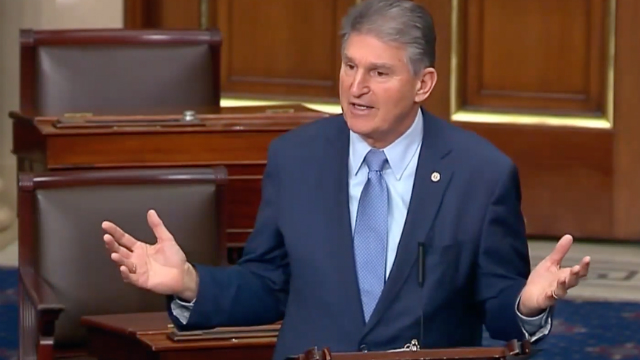 The following article, Leftists Furious as Democrats’ Abortion Bill Gets Torpedoed by Joe Manchin, was first published on Flag And Cross.

“It’s just disappointing that we’re going to be voting on a piece of legislation which I will not vote for today,” Manchin told reporters at the Capitol in a video shared by Politico.

The Women’s Health Protection Act introduced by Democrats “is not Roe v. Wade codification. It’s an expansion,” Manchin said. He added that he would have voted for the bill if it simply codified the 1973 Supreme Court decision establishing the “right” to abortion.

Manchin told reporters that he had been “pro-life all of my life,” even though he believes there are some exceptions wherein abortion must be allowed, Business Insider reported.

“We should not be dividing this country further,” he said. “We’re already divided.”

Manchin’s announcement that he would vote against the legislation prompted an online firestorm among Democrats and other pro-abortion activists who believe that women should be allowed to kill their children in their wombs.

“Joe Manchin is kind of like COVID. Every time we have a little hope, it shuts everything down,” Democratic strategist Jack Cocchiarella wrote in a Wednesday tweet.

Every time we have a little hope, it shuts everything down.

“Manchin has a houseboat. Boats can sink and in fact are sunk all the time,” one Twitter user said.

Manchin has a houseboat.
Boats can sink and in fact are sunk all the time. https://t.co/iHxXpGvoRa

The progressive group Occupy Democrats called for Manchin to be primaried, tweeting, “Sen. Joe Manchin stabs Democrats in the back and will oppose the bill to codify Roe v. Wade and enshrine abortion rights.”

BREAKING: Sen. Joe Manchin stabs Democrats in the back and will oppose the bill to codify Roe v. Wade and enshrine abortion rights because it “expands abortion” and says it’s a “shame” that the party didn’t create a bill he could support. RT IF YOU SUPPORT PRIMARYING MANCHIN!

But Biden can increasingly get Bernie and members The Squad in line? That’s where we are.

As expected, the bill failed to pass. The legislation did not even secure a simple majority, let alone the 60 votes needed to overcome the filibuster. Fifty-one senators, Manchin included, voted against the bill, while 49 voted for it.

Democratic Majority Leader Chuck Schumer suggested before the vote that Democrats knew the bill would likely fail. However, he said they were also aware of its potential to serve the party as a show-vote.

“We are making sure that every senator will have to vote and every American will see how they voted,” Schumer told MSNBC on Tuesday. “The MAGA Republican Party will suffer the consequences electorally when the American people see that.”

However, the legislation would not have just preserved the status quo but would have taken abortion even further, outlawing several pro-life protections, The Associated Press reported.

Additionally, the bill would have trampled the religious freedoms of doctors nationwide, forcing them to perform abortions against their will.

While federal law theoretically protects medical practitioners’ conscience rights, “the Biden administration disbanded the division of the [Department of Health and Human Services] Office of Civil Rights that had enforced those laws,” Richard M. Doerflinger of the Charlotte Lozier Institute told Fox News in a Tuesday statement.